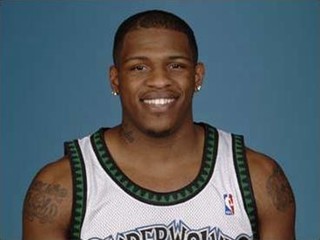 While the Shaun Livingston watch has now been renewed (really, when has more effort been made on a third point/combo guard?), let's roll back to Monday's "10 Questions Facing the Wolves" article written by the Strib's Jerry Zgoda. The best piece of his feature was speculating on who's more or less on the bubble. His conclusion was on the mark...it's Shaddy's time to rain or shine. At last season's training camp, he was talking big time about filling KG's void, in terms of leadership. We all know that didn't happen, and by the end of the year was chafing at coming off the bench.

While the injury to Jason Collins might force Kevin Love to start from the get-go, as opposed to working him in as the season progresses, unless there's other injuries that would affect the rotation (or Corey Brewer gains 9 pounds and a jump shot), it seems as if Rashad will be coming off the pine again this season, in the microwave role.

A look at Shaddy's career numbers from NBA.com:

Based on the numbers, some folks would think McCants might be primed to have a breakout year.

That's where stats are deceiving.

We saw consistently at the end of last year's games, or when the pressure was off, McCants effectively padded his numbers by scoring meaningless points. Often holding on to the ball for precious seconds on offense, he resembled a smaller version of JR Rider. His defense ebbed and flowed with his on court demeanor. In order for him to become a solid starter or rotational player, he's going to have to finish when it counts. It might be--in a spread offense with Foye and Miller on the floor--he will flourish, making quicker decisions and attacking the rack with abandon. A strategically used small ball lineup of Jefferson, Gomes or Love, Miller, Foye and Shaddy would even put a smile on crusty Don Nelson's face at times. Even though they haven't proven a thing yet, the Wolves on paper have that type of versatility on offense.

In the end, it will be the mental game that Rashad has to succeed at to be a productive player in this league. Whether he makes or breaks it with the Wolves, he will certainly get a flyer with another club, and can effectively argue that he wasn't used properly by Minnesota. I think he would lose the argument, but in addition to Minnesota playing at least adequate team defense, if we can see a mature McCants morph into the clutch scorer he claims he can be, that would be a catalyst to propel the Wolves past the mid-30 win predictions offered by just about everyone this year.