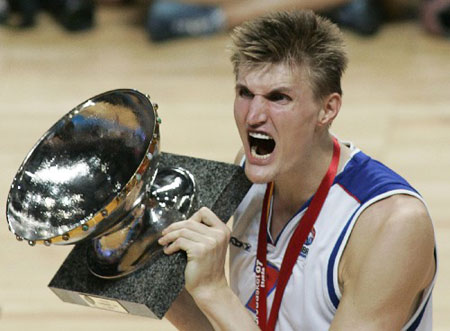 An upstanding RealGM member, jazzfan1971 proposed this deal that caught my eye:

Why for Utah: Utah gets cap relief and a good young player to develop in Brewer. This should help them resign Boozer and company.

Why for Minny: Minny gets a talented 3/4 in AK along with two promising young guys in Fes and Almond. This should help them compete for a playoff slot in the talented West.

Andrei Kirilenko would provide the serious shot-blocking presence the Wolves lack and, since he can play the three, would allow Love and Jefferson to still play together. He can hit the long-ball, he can grab boards (although with Love and Al he probably wouldn't be asked to do so much) and he can frustrate defenses on the perimeter. The man has three quint-quints for chrissakes.

But, on the other hand, Kirilenko has dropped off in production significantly over the last three years. Not to mention he hasn't played more than 75 games in the last 4 years.

The price for taking him off the Jazz's hands is, in part, taking on $26.7 million in salary. Not only does that throw '09 or '10 free agency out the window, but it's in exchange for AK the question-mark.

Obviously the other major price to pay is giving up on Corey Brewer. While he hasn't been able to put together a modicum of consistency yet, he's shown some on-court flashes (e.g. 18 boards in one game). Moreover, his off-court demeanor and work ethic are admirable.

Adding Kirilenko would increase the already crowded 3 & 4 spots. With Al, Love, Craig, Gomes, Richard and Madsen all likely to get some minutes at PF and Miller, Gomes, and Carney all logging in at 3, there becomes a potential time-crunch.

Although a Foye/Miller/Kirilenko/Love/Jefferson lineup with McCants, Gomes, Craig and Telfair off the bench sounds pretty good for this year and then some.

Lastly, while AK is the main piece, Almond and Fesenko are still valuable prospects that have a decent shot at becoming long-term contributors in this league. And Fesenko's hilarious.

A move like this is obviously a big risk, but is it one worth taking? What say you?