Share All sharing options for: The Night Chicago Died 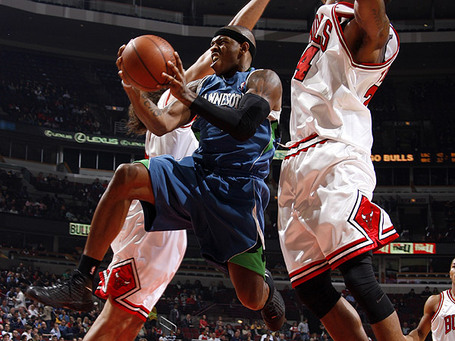 Well, it IS only preseason, but suffice it to say that if the Wolves played the entire game like they did the first quarter, the tone of this post would be much different. Tuning in on Chicago's Comcast SportsNet, I thought I was watching a track meet, as opposed to basketball. Minnesota responded nicely, however, for a 96-86 win. A video recap of the game can be found here. We'll save in-depth analysis for the real tilts, let's talk positives and negatives:

Corey Brewer. His outside shooting still scares me, but there's clear improvement over last season. Here's where the cliche "playing within yourself" comes to mind. His overall speed and defensive abilities will produce offense for him; if he stays focused and carries the improved stroke into the regular season, his obvious hard work will pay off. Brewer was a +8 for the night, scoring 15 points with 9 rebounds.

Kevin Ollie.  He was the best point guard for the Wolves last night, and demonstrated he won't screw up the team if called on to play. For a third guard, what more can you ask? Ollie ran the team well, hit a couple of clutch shots in the 4th, and exuded veteran calm. Unless a better player becomes available, he should make the roster. He was a +22 for the night, with 8 points and 3 assists.

Al Jefferson. He started slow, but finished pretty big, with the usual low post scoring, and one important block in the 4th. He was a +17 for the evening, with 13 points and 7 rebounds, but it was the 4 assists that impressed me the most. He's learning how to pass out of a double team. He'll never be a KG or Bill Walton, but he doesn't have to be.

Ryan Gomes. He didn't play too much (19 minutes), but his impact was felt on the court. His energy and scoring really helped the Wolves in the second quarter; he was a +24 for the night, with 11 points.

Interior Offense. The club dominated the points in the paint last night, 48-26. Add consistent outside shooting, with better defense, and we'll have something.

Interior and Transition Defense. This got a little better as the game went on, but in the first quarter, the Wolves shot around 22 percent, and the Bulls big men consistently beat our club down the court. Drew Gooden took all of our front court to school. Hmm...do you think other teams won't try and exploit that weakness? Again, here's where "good enough" would be welcome; simply look to improve, not take a step back, especially when Kevin Love will be under the refs scrutiny in his rookie season.

Randy Foye. He was bad last night, a whopping -19 in 26 minutes of play, with one assist and 4 turnovers. Yeah, the games don't count yet, and Telfair started at PG, but he has to get better.

I thought Chicago let their foot off the pedal last night and allowed the Wolves back into the game. To their credit, Minnesota came back and played a lot better, especially in the second half. The Bulls have a lot of issues like the Wolves; but a mid 30 win season makes them contenders for the playoffs in the Eastern Conference. And, they have Derrick Rose, who showed flashes last night, but still has to find some level of synchronicity with his new team, as does K-Love with the Wolves. After the Nuggets blow out, I was happy to see Minnesota respond with a road win. No one will remember the victory by November, but it was a positive sign nonetheless.