Share All sharing options for: Our First Real Win... 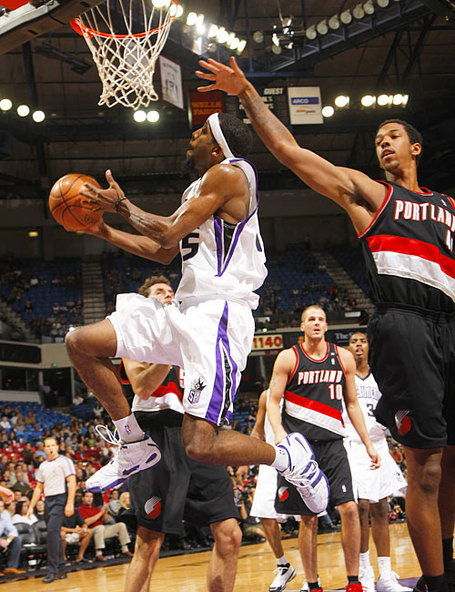 I've been watching Sacramento--our first regular season opponent--over the last couple of preseason games, and all I have to say is: what happened to THAT club? As much as we've followed the Wolves descent into mediocrity over the last few years, the Kings have devolved into a nondescript bunch; I can't tell who they exactly want to be.

Like the Wolves, they're in rebuilding mode. Kevin Martin is a nice player, but similar to Milwaukee's Michael Redd, I'm not so sure I'd want to build a team around him. Their attempts to refresh their front court with players such as Spencer Hawes, new number one Jason Thompson and Shelden Williams via the Bibby/Atlanta trade is inconclusive to date. John Salmons and Francisco Garcia are decent wing players, and in hindsight Udrih would been nice for the Wolves last year, but can you imagine a deep playoff run with any of those players?

Sacramento is right around where the Wolves are, a mid 30 win team with two first round draft picks in next year's draft and some expiring contracts (Kenny Thomas, Abdur-Rahim, Brad Miller, etc.) for the 2010 sweepstakes. For this year, it looks like they can generate enough offense to win some home games, but on the road, it will be Martin having a hot night against indifferent teams that will keep them in games. I can't believe the Wolves will be indifferent on Opening Night; therefore we should notch win #1 against this regal bunch.