Swing and a Miss

Share All sharing options for: Swing and a Miss 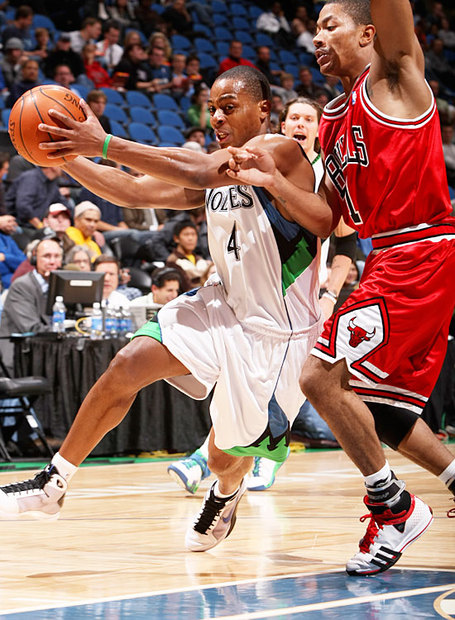 Nope, I'm not talking about the World Series, it's the Wolves failed comeback attempt last night, losing to the Bulls 85-75. After taking another first quarter off against Chicago like last week, this time the club decided they could also use a break in the fourth, scoring only 9 points in each of those quarters. At home. Ouch!

Positives and Negatives from the game:

Big Al. Offensively, he's back. Defensively, he's still a work in progress, but his low block play is beautiful to watch. Jefferson scored 19 points with 11 rebounds, and was +5 for the night. The fact he had no assists was more from the fact the rest of the team had shooting issues all night.

Rashad McCants. This one could go either way, but given the poor play of the other players, and the fact he was a +1 for the night, he gets a positive rating. His entrance into the game was underwelming with two straight turnovers, but he made some shots in the second half, and seemingly saved most of his scowls for the bench. Given what Chief Vindicator Jim Petersen said about Shaddy accepting the sixth man role, and needing to be in the team flow, I still have a feeling Wittman and McCants will be butting heads throughout the season.

Derrick Rose. Yeah, he's the opposition, but this kid can play. Even with 5 turnovers against 6 assists, he had 17 points and a +12 for the night. He needs to develop a clutch mid range shot, but barring injury Rose is going to be a very good to excellent PG in this league.

Kevin Love. Last night, K-Love was awful, with 1-10 shooting and a -19 for the night. But he only had one foul in 24 minutes of play, which is better, because this year he may well replace Craig Smith as the referee's favorite whipping boy on the Wolves team. I'm still on the fence regarding Love's future in the league, but Reusse's article on the rook this morning was unfair and premature.Give Love a Chance!

Corey Brewer. On the telecast last night, I swear I saw mothers shielding their kids as he was shooting. After a nice start to the preseason, he's reverting to form, clanking shots with impunity. I'll say it again, with the type of game he's got, he can score points with defense, hustle and transition opportunites. Yes, he needs to shoot better, but concentrating on what he does best and letting the rest come to him as he develops is his primary challenge.

First Quarter Starts. The Wolves have the shooters--and the low block stud--to get out of the gate faster in most games. Maybe if they came out ready to play defense, it would help them on the offensive end. Get some easy buckets, apply pressure, and for Jim Pete's sake, guard the perimeter better.

Shooting 32.5 percent doesn't win many games, so let's just say it was an off night, giving them the benefit of the doubt. Regardless of tonight's contest, the Wolves have had a decent preseason. There's a ton of stuff to work on, and some roster decisions to be made, reportedly starting today. We still don't know what big men will be sticking around, or getting signficant minutes. As long as the expectations are kept reasonable, this should be a more fun team to watch. They really need to come out of the gate with more intensity though, especially at home.

As S-N-P said in the thread below...remember to cast your Love Song vote!