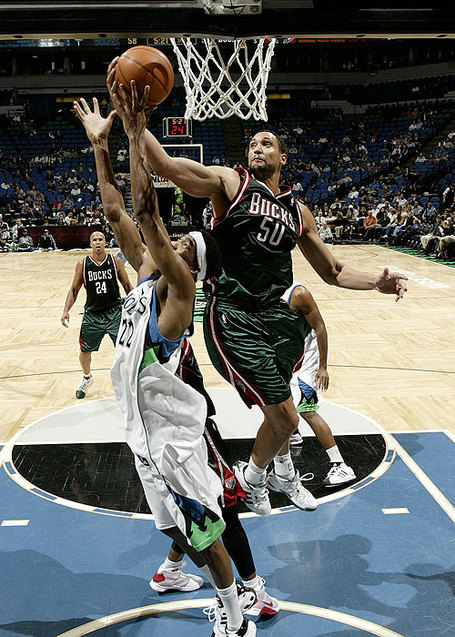 The Wolves rebounded from a listless performance against Chicago with a 95-76 win over the Bucks last night, closing out their preseason with a 6-2 record. News of the three roster cuts and speculation about further moves overshadowed a sub par game, but as with last year, the decisive win over Milwaukee gives the club some momentum heading into the regular season. We can only hope, pray, beg, plead, petition, demand, cajole, insist, ask or request that the Wolves season start out better than last year. Whatever works.

Big Al. Once again, he's the most consistent offensive threat on the club. Against the Bucks he went for 19 points, 5 rebounds, and a +9 for the night. One problem with the Wolves presently is that all the other roster "weapons" are going for long dry spells. While the regular season will bring hopefully a more balanced rotation and substitution scheme, those folks might want to shake off whatever first half shooting issues they have and help Al out.

Kevin Love. I've often thought that Jim Petersen and Tom Hanneman would make an excellent political rapid response media team. (They can't be any worse than Michelle Bachmann) Given Reusse's recent article torching Love, the spin on K-Love was in full force last night on FSN North. Of course, the REAL way an athlete can prove a scribe wrong is to perform, and to his credit Love did, with a 14 point, 10 rebound, +11 night. It doesn't negate the things Reusse said, but goodness, let's at least give the lad half a season before we mercilessly rip into him and scald McHale again for his personnel evaluation ineptitude.

Mike Miller. He stunk offensively in the first half, but got his shooting touch back a bit in the second, scoring 12 points, with 8 rebounds, 4 assists and a +7 for the evening. Here's what savvy veterans do; when they don't have it going shot-wise, they contribute the other little things to make their team better.Miller gets this, and his all-around game should be an example for people like McCants who still is at a "me-first" stage of his career.

Kevin Ollie. A + 14 for the night, one could debate at this point why on a team that probably won't make the playoffs do the Wolves need a veteran like Ollie at the third guard. I know Ahearn shot well, but I'm happy Ollie stuck. He's not spectacular, but the Wolves core players still need a little quality veteran mojo, and this guy seems to have it. Ahearn isn't really a point guard, and if you DO want to get the season off to better start than last year, given that Telfair is sitting out the first few games, having Ollie come off the bench gives you a better chance at success.

Ball Movement. The Wolves had 23 assists last night. Good for them, because in order to get "anyone but Al" off, the ball should be flying around the court to get folks open looks.

Perimeter Defense. Yeah, Milwaukee only shot 36 percent for the night, but the way Luke Ridnour started out, it looked like it was going to be a long night--again--on the perimeter for the Wolves. Given that it looks like the club is going to go with a small frontcourt for starters, there's going to be a lot of double teaming down low, which will naturally prompt teams to swing the ball around to someone open on the perimeter. Foye hasn't demonstrated much ability to guard anyone, and no one seems to want to pressure the ball coming up the court on a consistent basis. How many years have we seen that?

Corey Brewer. It looks like he's going to make the starting five. Okay, given the defensive issues on this club, I kind of get it, but it still looking like he's hurting the club more than helping at this point. He's losing his shooting touch, so his defense better be mighty good, because there are other starting configurations on the roster that would be more successful, especially when Collins gets healthy.

Anyone but Al. I've mentioned it throughout this post, but again, what about all these other weapons we were supposed to have? Can't more players start out a little better? Please?

As I mentioned last post, the Wolves have a ton of stuff to work on. It looks like they're going to start the season with a small front court, they can't guard anyone on the perimeter, and they need more balance and consistency from their offense. Still, there's a little buzz about this motley crew that could keep us interested and engaged for the entire season. Hopefully, this will be the year where we can finally find out whether Foye can handle the point guard position, and Wittman can coach without excuses. They have a great chance to start the season with a win, and if they can pull an upset or two against some initially tough competition (Mavs, Spurs, Blazers), breaking even in November would represent real progress. I'm a die-hard cynic, but I'm ready to be proven wrong.