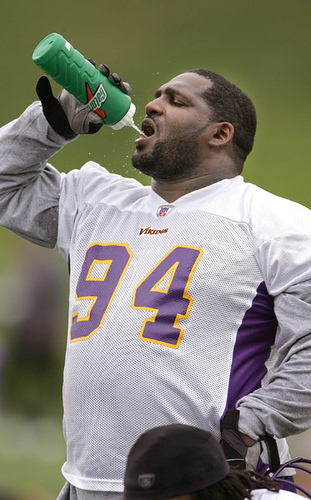 Love boats, poor draft selections, inept coaches, owners that don't perform their due diligence when hiring new coaches, terrible pass defense, predictable offense, ear-bleeding noise at home games, drunken dome fans, lame free agent signings, overpriced tickets, D-IA quarterbacks, and possible player drug use got you down?  Do yourself and your blood pressure a favor and ditch the Purple for the Wolves and the NBA.  Who needs to watch a bunch of steroid/HGH-injected lugs run into each other at full speed anyway?

Tomorrow the Wolves open up the regular season against the Sacramento Kings.  If you are a Vikes fan who has turned his or her back on the Wolves in recent years, or if you are someone who has never really given the NBA a chance, here are a few things you need to know about the 2008-09 Wolves:

These are the five things that new or returning fans should know about the current squad.  If you want to go a bit more in depth, you can read our season preview by clicking here.  I invite our readers to add their own ideas to the list in the comments section.

The bottom line here is that the Vikes are a crappy team that will do nothing more than break your heart, increase your blood pressure, and eventually numb your mind.  They'll probably meander around .500 for a few more years before moving to LA.  Do yourself a favor and get on the Wolves bandwagon.