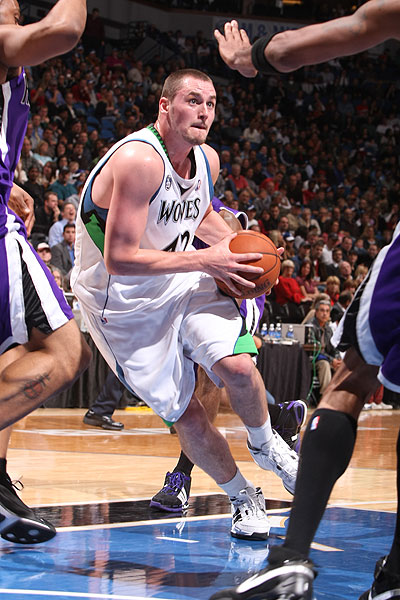 "What do I think of Love now?

This gets tiring, but once again it's time to bow to the personnel genius of McHale, not to mention the coaching wizardry of Wittman."

Watching the Wolves edge the Kings.

Since I am a terrible prognosticator, and a huge Wolves fan, let me first say it was great to see them win, especially since I dedicated an entire post to the victory last week. There was a lot to enjoy, particularly the ball sharing, balanced scoring, shutting down Kevin Martin, and the successful debut of Kevin Love.

But it shouldn't have been that hard. With Sacramento missing Brad Miller and Francisco Garcia, the Wolves shot poorly at the free throw line, didn't involve Big Al and Mike Miller much in the second half offense, and barely escaped with a two point win. Minnesota was out rebounded--again, in the second half--and allowed the Kings a number of second chances and opportunities to get back into the game.

So, I'll enjoy the "W", but against better competition, I'm afraid it wouldn't have been as joyous. Britt Robson mentions this in his missive about the game, but the idea that Randy Foye sat so long in the 4th has to concern folks both inside and outside the organization. He was a -10 for the evening with only 3 assists against 4 turnovers. For a club that shared the ball well last night with 25 assists, the reality that the point guard had a assists-to-turnover ratio in the negatory category is not a delicious one at all. It's a long season, though, and there'll be plenty of time to turn that around.

On the good side, we had the best two rookies in last year's draft on display, statistically speaking. Both Love and the Kings' Jason Thompson had impressive debuts, and far and away outdid anyone else in the Class of '08 in the opening Tuesday and Wednesday games. Love had a +20 for the night; in fact, the Wolves bench outshined the starters in the plus/minus category. For anyone that doubted the retention of Kevin Ollie over Blake Ahearn...ahem...please watch the last minutes of the game. The ability of Ollie to shut down Martin while Corey Brewer was able to guard John Salmons in the last possession of the game was huge.

I've said all along that on a team that overall is poor defensively, if you can play well in stretches and get a stop when necessary, for this year that will be good enough. The Wolves, with 10 steals, played opportunistic defense and translated those steals into easy points. Combine that with the ability to stop the Kings from getting a good look in the last possession, and we have the makings of progress, at least against the weaker teams.

So, there was lot to enjoy about the victory, but a lot of concern for the team as well. Sounds about right for a mid-30 win team. For today, I'll split the difference and stay positive.