Looking ahead to the 2009 Draft

Share All sharing options for: Looking ahead to the 2009 Draft 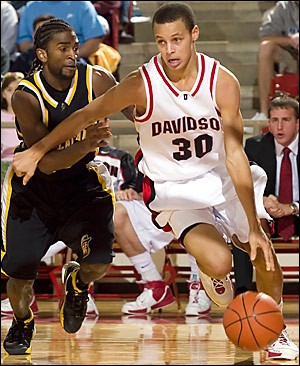 I know it's a long, long way off but with training camp almost over and with a long list of players trying to make the team, let's take a quick look at the players that Wolves fans should be keeping their eyes on during the upcoming season:

There are a few other players out there to keep an eye on, but I'm crafting this list with a few things in mind: the Wolves will likely have a late lotto pick as their first pick, and the rest of their picks will be mid-1st to late-1st.  With the exception of Rubio (a possible #1), I'm not trying to predict the order, or even the best ranking of players in the draft.  I'm simply trying to give you a list of players that will a) have a chance to be available with the Wolves' top pick, and b) fit a need with the squad.

At this point in time, I think it is obvious that the Wolves' top pick next year will be a guard or a wing player.  The Foye/Shaddy Death Match should be settled and the Ollie/Ahearn experiment will be over.  The Wolves will need a point or a lead guard to share the 1 duties with Foye and Bassy; ideally one who can split time at the 2 or 3 (or allow Foye to split more time at the 2).

Beyond these 5 players, here are 5 more to keep an eye on: Jrue Holliday (G- UCLA), Demar Derozan (G- USC), James Harden (G- AZ State), Tyreke Evans (G- Memphis), and Ty Lawson (G- UNC).  Also, don't forget about Tyler Hansbrough.  Kevin McHale may not be able to help himself if Mr. Hansbrough is sitting there when the Wolves are on the clock with their 2nd 1st rounder.

Anywho, here's hoping for Curry.  Get on the bandwagon while you can.

Next up, 5 things the Wolves need to improve in order to field a winning squad this season.