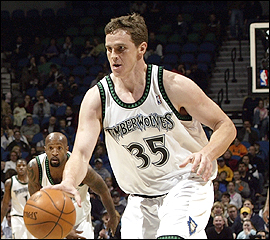 With news that Mark Madsen donated $2,500 in support of California's Prop 8, I thought it would be a good time to ask our readers about their thoughts on athletes and politics.

Mr. Madsen is a Mormon and the LDS church has been very out front in telling its congregation that they should support Prop 8.  I mention this not to strike up an argument, but to point out that Madsen may support this amendment on religious grounds, not just political ones.

The question for our readers is this: Do the political views of your favorite athletes matter?  After all, these are typically very wealthy men with high visibility who can make a difference.  Regardless of your answer to this question, surely at some point they do matter.  Where do you draw the line?

I'm not interested in having our readers debate the pros and cons of Prop 8 (you can do that in the previous post's comments section).  I simply want to hear your thoughts on athletes and politics.  Is there a point where you would stop paying money to see a player play if his political (or religious) views radically differed from your own?

I don't need to tell our existing readers to be respectful of one another because I know you all are, but if we have any new readers who come across this post, please know that this is not a political site and we have no interest in people who like to swear at, belittle, or bully those who would simply like to have an interesting discussion or those who have a different opinion than your own.

With that being said, what say you?

UPDATE: David Brauer takes up the discussion over at MinnPost.