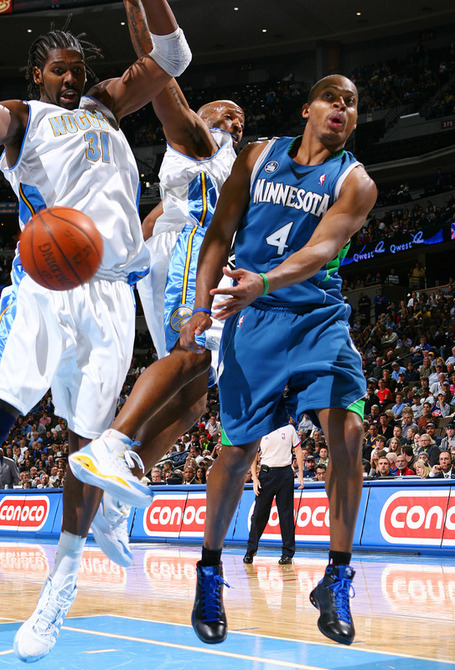 For the 2nd night in a row, Our Beloved Puppies were defeated by a team that was able to sleep-walk through somewhere between 2/3 and 9/10 of the game yet still turn on the jets near the end to secure victory.  The game against Denver also marked the team's 8th loss in a row, a mark that equals last season's longest losing streak.

Before I go on about last night's game, let me take a quick moment to say a few things about Saturday night's game against Portland.  Since the Stop-n-Pop family moved to southern Minnesota we don't get to as many Wolves games as we used to.  We used to buy a 10 pack or two of tickets in order to make sure that we saw all of our favorite teams and players, but now that we're 75 miles away from the arena, I spend my b-ball money on League Pass, a t-shirt or 2, and a nice warm up jacket.

Saturday night's game was the 1st game I've attended at the Target Center since the last game of the 06/07 season.  We had some incredible seats (many thanks to the people who made that happen) and a great time was had by all.  The NBA still has the best athletes in the world and there is no better sport in the world to view up close.  For those of you looking for a good way to spend your entertainment dollars, the NBA is very much worth your while.

With that said, I was surprised by a few things.  First, for the better part of the 1st half, you could literally hear the hum of the building (PA + furnace) over the crowd.  The most crowd-inducing moments of the night came when an older gentleman took off his shoes and went footloose during a dead ball contest and when a drunken guy in a white shirt displayed some of the worst white-boy dance moves imaginable on the big screen.  Seeing that the crowd wasn't exactly into the action on the court (which is a tragedy all onto itself and a subject for another post) the team now has a set of in-house announcers (one of whom is a Wally look-alike) who prattle on and on about how much fun everyone is supposed to be having, as well as introducing the dance team and the start of t-shirt contests.  I've been going to NBA games long enough to know that they sometimes go a bit crazy with the dog-and-pony show, but....well, when there's such a great deal of dissonance between fan interest and, say, Wally and his announcing gal friend, and when you can literally hear movement in the rafters over the cheering of the crowd, I think this should be a nightly reminder that excitement will only return to the building when the Wolves are able to put a product on the floor that can entertain its followers without all the external bells and whistles.  I should add that this is especially tough for die hard fans to watch.

Moving on to last night's game, it was notable from the start in that Randy Wittman trotted out a starting lineup of Sebastian Telfair, Ryan Gomes, Jason Collins, Mike Miller, and Al Jefferson...who quickly proceeded to get murdered by a 12-2 run right out of the gate.  It wasn't until Randy Foye, Craig Smith, Corey Brewer, and Kevin Love came in against a trio of Nugget reserves that the Wolves were able to put together a mini-run to keep the 1st quarter from being anything more than a 10-point blow out.  (BTW: that's another 10 man 1st quarter for those of you keeping track at home.)

The starting lineup offered a mini-glimpse into what is quickly becoming the most obvious problem with this team: a dearth of above-average talent highlighted by awful guard play.  For those of you out there who have been clamoring for a tall-ball lineup, this was about as large of a lineup the Wolves can trot out on the floor.  It was quickly exposed for the offensive nothing it was.

Each and every single time Jefferson caught the ball in the post, he was quickly doubled by anyone but Mike Miller's guy. Mostly the double came from Bassy's man, but we did see a few runs from over Gomes' way as well.  Double team, double team double team.  Even if Al was a good passer, there really wasn't anywhere for him to go as once the ball entered his hands, Mike Miller's running and cutting don't do a damn bit of good as Jefferson isn't going to hit a moving target, and it's also not likely that he'd be able to make a skip pass should Miller set up on the other side of the court.  I can't say it enough: this team has to win with offense.  If you think its small ball personnel is bad on the defensive end, you ain't seen nothing until their tall-ball guys give it a go on offense.

Of course, the problem here may be neither small nor tall ball.

During the Portland game, Minnesota showed some encouraging signs of offensive life in the first 1/2, scoring 51 points against a fairly decent Blazers squad.  They did so while running a nicely spaced offense that actually featured 4 men on or near the perimeter and Big Al on the low block.  Believe it or not, there were cutters and jump shots.  However, once the ball was entered to the big fella, Portland would run a double at him from behind, across the baseline.  This would force Al to either attempt a shot through a double team, a skip pass across an athletic front line, or hit a cutter.  With small or tall ball, if you are going to run your offense through a guy that can't pass, it's going to get ugly when teams scheme to make him have to choose between 3 options; 2 of which he really can't do.  Al is a fantastic player but he is also fantastically limited.  With humming rafters and drunken fans that offered more entertainment to the casual fan than did the product on the court, you really have to ask yourself if "cornerstone" is a word that should be used around Mr. Jefferson.  You also have to ask yourself if not having a real coach or a functional back court is adding fuel to the fire or whether or not Big Al is simply Zach Randolph without the baggage.

Moving on to the back court, after watching the last 2 games I feel more confident than ever in saying that Randy Foye has no business being an NBA point guard.  While he has cut down on the let's-jump-in-the-air-without-a-point plays, his new main focus appears to be passing up open threes on kick outs in favor of taking a dribble or two inside the line and jacking up the worst shot in all of basketball: the not quite 3.  The shot chart isn't up yet for last night's game but against Portland he had 6 shots that were just inside the line.

It was mentioned in the comments (plinytheelder) that perhaps Foye should view being a point as simply bringing the ball up the court and emptying it to a wing or the post and then transforming into an off guard who doesn't have the responsibility of finding mismatches, running plays, creating space and angles, etc.  I can't think of whether or not I should high-five or cry about this opinion.  This is a guy who was the team's top pick in the 2006 Draft and he is supposed to be the point guard of the future.  Yet, he doesn't seem to be aware of even the most basic point guard responsibilities.  Last night late in the game he dribbled to the wing where it was obvious a play was to be run involving a screen.  Jason Collins and Mike Miller were in the area and Foye kind of weakly passed it to Miller who was then trapped in a tight space with a 7-foot Collins, his man and 3 other bodies.  Foye just kind of stood there; apparently not seeing any sense of urgency in providing Miller with an out or creating some space on his strong hand to allow him some room to operate.  Turnover.  Foye was greeted on the bench with a WTF look from Witt.

Let's wrap this bad boy up with some bullet points:

That's about all for now.