Game Day: Bring on the underachievers!!!

Share All sharing options for: Game Day: Bring on the underachievers!!! 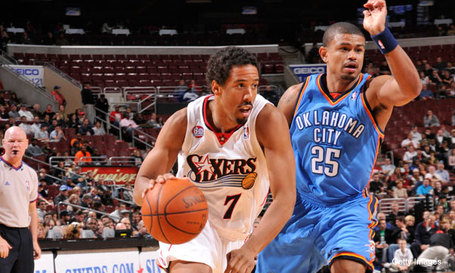 Wolves fans, I suppose it could be worse.  You could be rooting for a team that is off to a less-than-overwhelming start after picking up a previously-injured free agent star who may or may not have stabbed his old team in the back and who is lead by a Hollinger All-Decline Team pick and an absurdly high paid 2nd scorer.

As you can see from the picture above, the 76ers are also one of the poster children for poor NBA attendance.  They are currently 28th in league attendance at 12,758 fans per game.  Of course, as anyone who has been to an NBA game lately can tell you (or as anyone with League Pass can tell you), there's no way on God's green earth that over 12k fans are showing up at some of these games.  Our Beloved Puppies are reportedly ranked 24th in league attendance at 14,509 fans per home contest.  Horse plucky.  I didn't see 10k fans at last Saturday's Portland game even thought the attendance was listed as being over 12k.  Ball Don't Lie has more on NBA attendance woes:

The financial crisis has had an impact on all professional sports teams in some way, but it sure feels like the NBA may have been hit harder than anyone over the last couple of years. Just two seasons ago, the league broke its own attendance record ... now you read stuff like Mushnick's column.

When you look at the attendance figures one thing is clear: fans want to see a winner. The Magic (ranked 20th, after six home dates) are the only team in the bottom third of the chart that has a winning record. Winning would cure a lot of teams' concerns, but I don't think that is the overriding problem.

I just think the NBA game has gotten stale in a lot of markets.

When I go to games, even ones that are packed in other cities, I don't see a lot of fans decked out in their team's gear, I see a lot of yuppie businessmen who have decided that the NBA game is the place to be seen. They could care less what happens on the court, as long as they can glad-hand the rest of the "important" people.

As someone who used to attend about 20-25 games a year, I was a little shocked by the apathy in the building during the Portland game (which was my 1st home game this season).  It was over produced and the only "energy" in the building was the result of drunken or dancing fans and piped in noise.  A good product certainly helps but the dog-and-pony show has become so prominent and forced at NBA games that it's almost like watching pizza shop animatronics...although maybe not quite as entertaining:

We talked about it at the Portland game: the NBA cannot maintain its current financial and attendance course.   Back in August I wrote a post entitled If I Ruled the World.  You can read it here. It puts forth a few suggestions about how I would change the NBA.  What would you do to make the game and league better?  Something needs to give.

Most teams do not have the luxury of featuring a player that averages 22 points and 10 rebounds a game. Al Jefferson is an extremely talented big man that rarely receives the type of national recognition he deserves. The center averages more points than Dwight Howard, Carlos Boozer, and LaMarcus Aldridge. Jefferson also hauls down more rebounds per game than perennial all-stars: Tim Duncan, Chris Bosh, Kevin Garnett, and Amare Stoudemire. On his way to a career season, Jefferson shoots 51 percent from the field and just under 80 percent from the free throw line. True basketball fans recognize the talent Jefferson possesses but until the Wolves start to compile wins, No. 25 will fly under the national radar.

Did you catch it? "The center."  This is the first time I can remember anyone associated with the team calling him a center.  We've talked about this issue before.  Click here to read about Al the 4 vs Al the 5.  Remember that at this time last year we were listening to the Iron Ranger prattle on and on about how nice it would be to have a shot blocking center line up next to Big Al.  Oh Theo, where have you gone?

Wrapping this bad boy up, I'm guessing the Wolves will put up a good showing in the 1st quarter followed by even play throughout the 2nd, 3rd, and part of the 4th.  They will then proceed to score between 14-16 points in the 4th while Philly grabs the victory.  This leaves yours truly with a choice: watch yet another version of a game I've already seen too many times this year, or go on line and play the greatest video game of all time, Left 4 Dead:

It's a tough choice: kill video game zombies or watch the evil zombie creation of head zombie Kevin McHale.  No matter what he screws up...he will always be back.

You can read the Sixer take over at our sister site, Liberty Ballers.