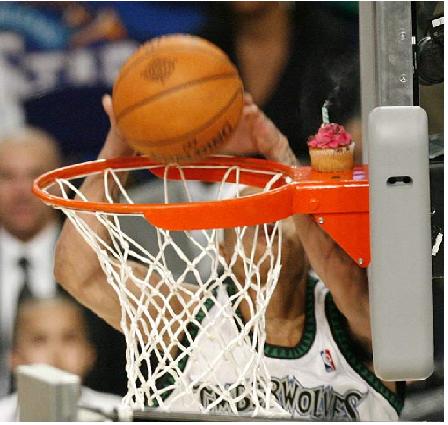 Wolves fans, not only did last night's game see the triumphant return of Dwayne Casey to the frozen tundra, but Mavs fans were treated to a glimpse of the never-quite-realized potential of one Gerald Green.

For those of you who attended the game or watched it on local TV you missed out on the gushing praise and optimism concerning Cupcake exhibited by the Mavs TV crew on League Pass.  At one point in the game the following words escaped the lips of the Mavs' color commentator: "Gerald Green is going to help this team."  While Cupcake did have a nice night against his former team (+8, 9 points, 2 rebounds in 16:25) I hope that Mavs fans don't get too wrapped up in a player whose vertical will always eclipse his performance.  As for the rest of the game:

Minnesota's big 3 of Al Jefferson, Randy Foye, and Mike Miller had an amazingly bad game.  They were a combined 12-50 from the floor while compiling a -10 +/- rating.  Miller and Foye went for 1-7 from beyond the arc while doing very little else on the glass or defense to help their team win.  Foye was particularly awful, constantly dribbling about without purpose and leaving his feet without having a clear idea as to whether he would pass or shoot.  While he did manage to stop the presses with 2 left handed shots, the offense struggled when he ran the point and if a case were to be made against the worth of +/- stats, his performance last night would be Exhibit A. Unlike their first game, Kevin Ollie was unable to back up Foye's shortcomings at the lead guard.

Ryan Gomes also had a down night, struggling at the 4 against a Mavs lineup that was able to run out Brandon Bass, Eric Dampier, and Dirk Nowitzki against the undersized combo forward.  On both ends of the court the Wolves were noticeably better with Kevin Love manning the PF position.

Speaking of Mr. Love, can we already proclaim that the Wolves' newest draft pick is their 2nd most talented player?  While he is sure to have his rookie ups and downs, no other player on the squad outside of Big Al seems to have his feel for the game or his ability to generate positive numbers within the flow of the offense.  If he continues to perform at this level he should be inserted into the starting lineup within the next 5-10 games.

Ultimately, the Wolves were done in last night by poor shooting.  They got to the line more than the Mavs, made more free throws, grabbed more rebounds, and committed only 4 more turnovers than Dallas.  However, all this work was for naught as they shot less than 40% from the field while going 1-12 from beyond the arc.

On the bright side of things, while watching this game I got the sense that the Wolves would have lost this contest by about 20 with last year's lineup.  This year's team held in there until (almost) the very end.  Their last gasp came when the ball was kicked out to a wide open Randy Foye at the 3 point line and instead of hoisting up an uncontested 3, he drove into the trees, had his shot blocked, and the Mavs converted a fast break dunk.

All-in-all it was a pretty frustrating game to watch.  However, unlike last year's monstrosity, this year's club was in this game all the way and they were done in not by talent but by poor execution and questionable rotations.  I know it doesn't sound optimistic, but this is a pretty solid development.  The Wolves can now play with a team like the Mavs while having a pretty decent expectation of winning.  They have increased their tempo and they have a 2nd unit that can keep things interesting.  I know it is just 2 games into the season but I feel pretty confident in saying that the two biggest themes for the squad this year will be point guard play and coaching.  Can Witt develop a solid set of rotations and can Randy Foye become a serviceable player at the lead guard?  Other questions like "Can K--Love and Big Al coexist?" and "Can they play good enough defense?" will be secondary to the issues concerning Foye and Witt.

Here's hoping for a better result today against OKC.