Morning Reading: The Celtics Are In Town

Share All sharing options for: Morning Reading: The Celtics Are In Town 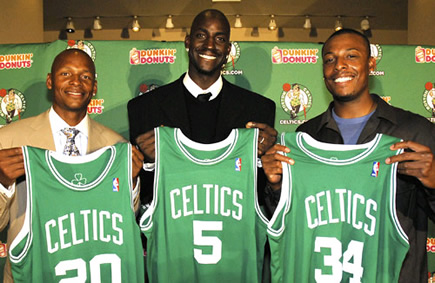 Just thought a quick run-down of people weighing in on KG's return would be useful in case you missed any. It'll be nice to actually see him play this time, lucky for us he didn't get a two game suspension for his dust-up with Bogut. <conspiracy theory alert>But I suppose Stern couldn't let that happen.</alert>

My favorite quote in the whole sh'bang is from the Boston Globe story:

When told his Celtics jersey was still a hot seller in Minneapolis, Garnett chuckled before saying, "I can't even comment on that. I guess it's a compliment."

You're damn right it's a compliment. For all his talk about the importance of loyalty, and his unhappieness with how much he felt Taylor and McHale showed him, you'd think he'd mention appreciating the fan loyalty exhibited in the merchandise department.