Share All sharing options for: Game Day: Detroit, the bailout 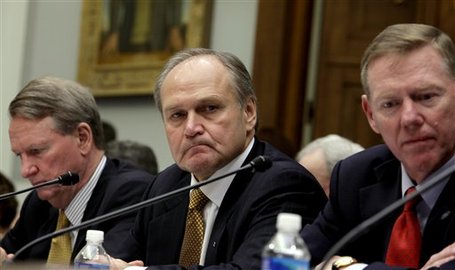 Fear not Detroit!  While your captains of industry may have run your city into the ground (and flown away on private jets) Minnesota has just the ticket for any ills your professional basketball team may be having: Our Beloved Puppies Zombies.  I know it's not much, but it's the best we can do right now.

For all of you Detroit fans who don't play much (or any) attention to our favorite team, let me give you a brief rundown of where things stand: Last year the Wolves were simply awful.  This year they are simply awful.  Glen Taylor continues to poke fans in the eye with his insistence that up is really down, Kevin McHale is still employed, Randy Wittman has a career .328 winning percentage (and $5 mil + 1 year remaining on his contract), and Randy Foye can't play point.   That's about it.

For our loyal readers, this is the last time I mention Foye's inability to play point.  Randy is a nice player, a wonderful story, and a tremendous asset to his community.  He was placed in an untenable situation by a posse of clowns who don't get the fact that the only reason they got as close to winning as they did in the first place was because they drafted a historically great player who they then failed to properly utilize...and who was properly utilized in less than a single calendar year after being traded away to the Celtics.  These clowns then have the nerve to tell their fans that the new squad has the juice to go .500.  They shout out to the world that their coach--a guy who could reach his 100th loss with the team in less than 2 full years today in Detroit--is safe and will be going nowhere any time soon. Stick. Eye. Poke.

"I just shudder when I hear people judging players a year into their career," McHale said. "If you were to judge John Stockton after his first year and a half in the league, you'd say, 'Well, Rickey Green is playing ahead of him.' Now you look back and John Stockton is in the Hall of Fame."

That would be Mr. McHale talking about Mr. Foye.  Again, Randy had absolutely nothing to do with the fact that the clown posse traded away Brandon Roy for the Villanova combo guard + cash and then handed him the keys to the team at the point.

Really, really, really completing the circle, I strongly urge Minnesota legislators to seize the Timberwolves and all their assets, declare the organization to be a bank holding company, and jet off to D.C. with hats in hand to beg for TARP funds and a new front office.  Let's close out this bad boy with some bullet points:

Well, that about does it for now.  For all of your Detroit basketball needs, please mosey on over to  Detroit Bad Boys, Need4Sheed, or PistonsNationBlog.