Share All sharing options for: Detroit succumbs to zombie horde!!! 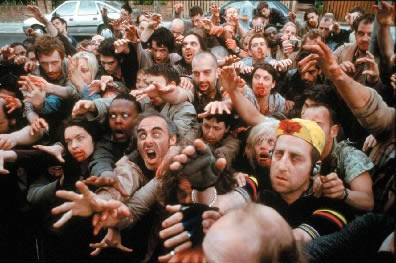 What a game.  More to follow.  First, Mr. Stop-n-Pop has to set a floating mortar floor for a basement shower by way of strict orders from Mrs. Stop-n-Pop.  What we saw tonight was more winning zombie basketball: up tempo, keep it simple and true...and 53% shooting.  That last part always helps.  Until later.

UPDATE: OK, now that the 2 x 4s have been anchored and the frame has been set, yours truly finally has some time to put down his thoughts on the game before he's tasked with actually filling the frame with concrete.

In their win against Philly I mentioned that perhaps the only point guard responsibilities that Randy Foye should have are the very basics: dumping it to Al Jefferson, bringing the ball up court, and starting off pick-and-rolls/ pick-and-pops.  Last night during 1/2 time, Wolves assistant coach Jerry Sichting mentioned something to the effect of the following: "We've pulled a T-Jack and shrunk the playbook."  Hallelujah.  It's enough to make you want to dance:

As long time readers of this site know, I'm a big fan of the Dribble-Drive Motion offense.  Without getting into the details of the system, the best part of DDM is that it teaches players how to play ball, not run plays (this is a bit over-simplified, but you get the picture).  In effect, with DDM you're not teaching to a specific test, but rather you allow your players the freedom and trust to handle any test.  I'm not saying they should swap out the offensive playbook; rather that they should adopt some of DDM's concepts into their repertoire.

As we have said many, many times before, the Wolves are who they are.  They are a small ball roster built for up tempo offensively-minded ball with short rotations.  They aren't a defensive juggernaut, they don't have a lot of above-average talent, and they don't have a real point guard.  Witt and Big Al can yell at Foye until they're blue in the face (and they often do) and it will not change the fact that he's simply not going to be effective running the sets they have attempted so far this year.  (As a side-note, with word that Kevin McHale may not have talked to UNC coach Roy Williams before drafting Rashad McCants, one really has to wonder if he has even a passing familiarity with Villanova's offense.)  There are no shot blockers or guys that can get their own a'la Kobe or Roy in the 4th on this roster; their power forwards are undersized and thick; their shooting guards are lacking on defense; their 3 point specialist doesn't like to take shots; and their only true point can't shoot the ball.  Remember folks, zombies only want to eat your brain.  They can't do anything else.  It's not in their nature so don't waste your time trying to civilize them. It won't happen.

Getting around to last night's game, it was even more of a blueprint for success than was the win in Philly.   Unlike Philly--where the Wolves escaped solely on the backs of 51% shooting while getting dominated on the offensive glass---last night's victory could have taken a few hits to the FG% and still walked away.  It was efficient, fast paced ball geared towards the strengths (and nature) of the players on the court.  They were playing ball, not running plays.  Let's end this with some bullet points:

This was a good game for a lot of reasons.  First and foremost, the team finally started to play simple and to their strengths.  There's no sense in over thinking this thing.  Secondly, it showed that they're not nearly as bad as their 3-9 record would suggest.  I still think Randy Wittman has gotten in the way of a few of their losses, but they have left a lot on the table, mostly in terms of offense.  Here is a list of teams with greater negative point differentials than Our Beloved Puppies Zombies: Chicago, New Jersey, Memphis, Charlotte, Sacramento, DC, LAC, and OKC.  Of those teams, only New Jersey has a better combined OE/DE ranking than the Wolves.  In other words, they've underperformed just a tad.  They're better than a 43% shooting team.  Randy Foye is better than a 34% shooter who only gives the team 3-4 apg.  Mike Miller should be taking more than 7-8 shots/game.  Jason Collins is not a real starting center.  I'll repeat what I said before the Portland game:

The Wolves have the 25th worst eFG in the league. They attempt the most shots/game in the league (granted, they have played some overtime games).  That being said, if they shoot a baseline 45% from the floor, they make about 2 more buckets/game and we're talking about a 3-4 or 4-3 type team.

This team is losing these close games more because of offense than defense. They shouldn't be this bad from the floor. They have the personnel to make this work (and get turned around quickly) on the offensive end. Not so much on defense.  This team is a small ball team.  Yet, it has a coach who believes it to be a slow-em-down defensive-minded squad.  It's absurd.

Has the absurdity finally started to fade away?  Here's hoping last night's game was a trend and not an outlier.