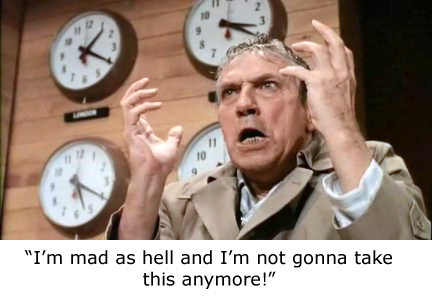 The following post from the MN Sports Fans Timberwolves forum came through my feed reader this morning. However, I wasn't able to find the original post in the forums, so I wonder if it was removed. Thus, here's the entire post:

I did *not* appreciate the not-so-subtle homophobia... from The Lizard King

...displayed at the Boston game tonight at the Target Center by the Wolves management.

I went to the game tonight with my son. During one of the timeouts, Crunch (the mascot) brings out a skateboard helmet with two antennae glued to it in one hand and a megaphone in his other hand (kind of like the ones used by male cheerleaders in college). The beginning of the schtick was that Crunch was a scientist/inventor, and he just discovered a device that can read people's minds...

He puts it on one courtside dude's head, and points the megaphone at the jumbotron -- up came a picture of a glass of beer. The crowd roared, collectively thinking to itself, "cool, the dude likes beer."

Crunch then moves on to another courtside dude, puts the helmet on his head, and points the megaphone at the jumbotron -- up came the picture of Pamela Anderson (jiggly footage from Baywatch). Again, the crowd roared, collectively thinking to itself, "cool, the dude likes to look at Pamela Anderson bouncing around in a red one-piece bathing suit."

He moves on to the last dude, an obvious Celtics fan, decked out in full Celtic gear/regalia. Cruch places the helmet on the dude's head and points the megaphone at the jumbotron -- up came the picture of David Hasselhof (also footage from Baywatch), implying, of course, that only a male Celtics fan would think about David Hasselhof's hot body. Again, like a bunch of sheep, the crowd roared in approval. Not good. :no:

The "joke" when right over my young son's head (he's 8), but I was in no mood to explain the "joke" to him, even after he badgered me numerous times to explain it to him. Overall, a tasteless schtick from the Wolves, and I would hope that they shelve that routine forever. :hammer3:

I usually have fun at the games, win or lose. Tonight's "humor," though, left me feeling like the Wolves had crossed the line from family entertainment to blatant homophobia. Doesn't Glen Taylor know what Twin Cities minority demographic group supports his Lynx more than any other that one can think of?

Sheesh. Just my $0.02. Carry on with the b!tching/moaning about: 1. McHale; 2. Hoiberg; 3. Wittman; 4. Taylor; 5. The Love/Miller for Majo trade, etc. if you must. Of all the screwball management decisions that the Wolves have made over the past 20 years, this one ranks as number 1 with me.

It may seem like a small thing to some readers, but I shared The Lizard King's offense at a joke obviously made at the expense of homosexuals.

Regardless of any individuals' view on the matter, I don't see what the Timberwolves could gain by alienating a potential group of fans. And before anyone starts arguing there aren't basketball fans in the gay community, click those links. If anyone's actually got comparative data on the proportion of straight and gay people that are sports fans, I'll listen.

Didn't the Wolves marketing department hear about the whole dust-up this summer about KTLK's idiot announcer making a derogatory dig about the Lynx and gay community? Heck, SnP heard about it all the way down in Mankato.

This isn't about a politics and sports intersection, this is about a team with terrible attendance using a specific demographic as the butt of a joke. Again, it might seem small to some people, but I'd bet a pretty penny that more people than just The Lizard King and I took umbrage with Friday's performance.

And another thing, this "Celtics fan" in the skit was obviously a plant. He wore #1 C's jersey with no name printed on the back and shortly after the skit put a pea coat on and exited through the tunnel, not to be seen again. This whole thing of spicing up antics with plants is understood (to ensure the intended joke gets across), and it really does appear to fool some attendees. But, personally, I find it annoying and contrived.

While I'm complaining about the in-game entertainment, is anyone else embarrassed that the same "America's Funniest Home Videos"-style clip is trotted out almost every game? And, moreover, that game attendees seem to eat up said-repeated video clip every game?