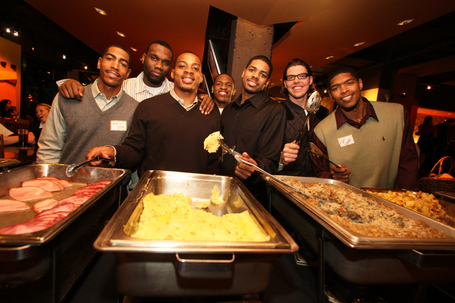 With family and friends coming to town tomorrow and with a game tomorrow night, I'm going to post our Thanksgiving post early.  Here's an SI link via Phoenix Woman:

NBA star Derrick Coleman saved his money and now, having retired, is using it to do good in his hometown of Detroit:

PLEXIGLASS BARRIERS had gone up along Linwood Street, encasing attendants at gas stations and clerks at liquor stores, sealing employees from harm but also human touch. Hard to slide a hug through a slot meant for credit cards, pens and pennies. After the racially charged riots of 1967, when the west side of Detroit burned, most of the remaining businesses installed bars, steel shutters and, of course, bullet-resistant glass, making every trip to the bodega feel like a prison visit.

Who could restore dignity to the neighborhood? Who could lift the spirits of residents, especially now, with the auto industry on empty? A renowned lazy ass.

There is neither plexiglass nor steel bars in the four stores he owns in Coleman’s Corner, a handsome strip mall of brick and stucco he opened last year, part of a $6 million (and counting) investment he has made into developing the first retail center on Linwood Street since the riots. So neighbors don’t get haircuts in their basements anymore; they gather at the Barber Lounge, where they can talk politics and watch football on the tube every Sunday. So teens don’t have to take two buses to a suburban mall for a job; they can walk a few blocks to punch a clock at Hungry Howie’s, the pizza franchise Coleman owns and Johnson manages.

Johnson was the one who winced when Coleman refused to raise prices as gas shot to $4 a gallon and the cost of food skyrocketed. He was the one who saw a 2% drop in the ledger after Coleman decided to offer a dollar slice of pizza from 11 a.m. to 7 p.m. last summer. "Derrick remembered how, as kids, we’d take bottles in for a deposit," Johnson says. "He wanted kids to be able to buy a slice with them. I’d tell him, ‘It’s costing us.’ And he’d say, ‘That’s O.K., school will be open soon. Then, we’ll end it.’"

Some of those same children held an ear of corn for the first time when Coleman, a student of urban agriculture, brought a weekly farmers’ market to a parking lot across from his mall. Who knew eating right didn’t include a Fruit Roll-Up? "And you wonder why we, as black people, have a high rate of diabetes and high blood pressure," says Coleman, who hopes to ultimately own seven blocks in the area. He can talk green energy solutions, biofuels and the platform of his candidate for Detroit mayor, Dave Bing, the Hall of Fame guard and former Piston. Years ago, Bing built his manufacturing business in Detroit’s inner city. "He has been my father figure," says Coleman, who stood next to Bing when he announced his candidacy last month. "I’m in his footsteps."

Derrick Coleman was often criticized during his NBA career for being lazy because he didn’t confuse his career with his life. Turns out that this "lazy" man is working very hard to make his home town a better place.

This site is focused on T-Wolves basketball and the performance of the players on the court.  Every now and then we'll post a funny photo of a player getting caught at a party or out in public, but for the most part we keep the discussion about on-court performance.  By doing so we often forget that while we may think that players like Randy Foye can't play the NBA point, his "value" to us is pretty limited in scope when you look at the grand scheme of things.

I wouldn't say that this is a lack of perspective; rather, it's simply a nature of the beast.  We don't want to place a caveat on each and every single post that talks about how Player X isn't performing up to snuff, or about how he has been placed in a situation that is above his pay grade. We know guys like Foye, Ryan Gomes, Rashad McCants, and Al Jefferson do a great deal of good in their communities.  Do we need to focus more on this aspect of the team here on the site? What do you think?  Is it too much to call for a Shaddy v. Foye Death Match because it's shorthand for a belief that the front office drafted duplicate players in consecutive years and that they'll eventually have to pick which one stays and which one goes?  At the end of the day, our readers want to hear as much about the off-court aspects of the team as they do about what we writers do at work or around the house on the weekends.

That being said, whatever your thoughts are on the subject, this is the time of year for giving thanks and we here at Hoopus urge you go donate time and/or money to a charity or organization of your choice.  Me personally, I will be heading on over to the Randy Foye Foundation's website.  Here is its mission statement:

Randy Foye is dedicated to giving back to the community where he was raised which is Newark, New Jersey. Having lost both his parents by age six Randy has seen first hand the difficulties kids can have growing up in a tough urban environment. Despite growing up in these conditions, Foye still rose up to graduate from Villanova University in four years and is currently playing in the NBA.

Randy hopes to be an example for the youngsters in Newark because he knows the difference a positive role model and nurturing environment can make on a young person’s life. He is committed to showing the community that you do have hope and you can make a difference in this world.

Through Foye’s own story and contacts in the sports, entertainment and business worlds, the Randy Foye Foundation (RFF) plans to raise funds and devote the time to develop programs and projects aimed directly at improving the lives of the people, especially the kids, of Newark. Working hand in hand with the mayor’s office, the corporations and the people of Newark, the RFF will serve as an example of what a grass roots movement can accomplish through special events if everyone is focused on working hard and giving back.

The RFF’s first project is fundraising to raise seed money to begin renovation of the 1st and 3rd Street Park, scheduled to begin in 2009. This park was one that Randy grew up around. It has become run down and infested with bad influences for the neighborhood children. We plan on TAKING IT BACK. Help us get this started.

You can donate here. If you are in the Mankato area and you simply want to volunteer your time, I suggest Kids Against Hunger or the Blue Earth and Nicollet County Humane Society.  You can also check out Ryan Gomes' Hoops for Heart Health.

Have a happy Thanksgiving.

PS: If any of our readers know of a good charity or organization that deserves greater attention, please write it down in the comments section.  And no, individual PayPal accounts do not count.