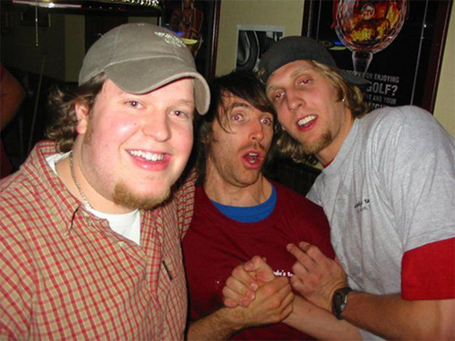 Hello, my name is Steve Nash and I'm a recovering D'Antoni addict.

I used to be nothing more than a 7SOL kind of guy but now I have this big lug at my side...following me everywhere I go, making sure I keep things slow and low.

Now Mike is off in New York running up and down Times Square while clearing cap space for 2010 and here I am wasting away with an oversized cactus.  Talk about a bunch of bunk. Hell, I could still be running around with Dirk.

You are where you are Steve.

(tapping his feet on the floor)  I gotta go man...gotta go.  Walk the ball up the court?  Man, f-that.  (throws down his cup of coffee and runs out of the room)

Randy Wittman was on the Chad Hartman show yesterday.  You can listen to the podcast of the interview by clicking here. Truth be told, I like Witt.  He was the only Wolves official that didn't buy into the BS 42-game nonsense at the end of last season and he seems like he has a fairly dry sense of humor about his situation.  As for the Son-of-Sid, I have a love/hate relationship with his work.  On one hand, he's the best interviewer on KFAN with the best mix of good sports talk and current events.  Unlike Dan Barreiro and his phony-baloney sorry-for-offending/sorry-for-giving-a-blanket-apology schtick, Hartman's approach to his show seems less like an attempt to place himself in the meaningless middle of whatever 2 sides of the issue he is talking about than it is a sincere attempt to work through the matter at hand.  On the other hand...his voice.  Sorry, his radio voice is simply unlistenable at times.  It comes and goes in its thickness but good lord...when it comes, it comes, and I have to turn the channel.  OK, enough with the radio critique...

Witt always seems to have good stuff on Hartman's show.  Yesterday he took a few pot-shots at bloggers by using the tired old cliche of "aren't those the guys who sit in their mama's basements?" Right.  He was talking about Britt Robson with this particular comment.  It's pretty amazing that a coach with a sub-.333 career winning percentage, and who is currently at the helm of a 3-9 team that can't fill its arena, would be taking pot shots at the one guy in town who pays attention to the squad and writes at great length about it after each and every single one of its games.  It's also pretty amazing that he would go after a group of people who a) pay attention to the club, b) talk about the club, c) encourage people to go watch the club, and d) have a combined readership greater than the number of people who ended up watching the club on TV during last year's final games.  It's called the new media, coach.  We're not all loser geeks in our parents' basements who are covered in cheeto stains.  We have good paying jobs and wonderful families and we do this as a hobby because we happen to like your piss-poor team and organization despite all of its piss-pooredness (and repeated pokes in the eye). We literally have people from around the world talking about a 3-9 ball club.  This isn't something you should be sneezing at.

Outside of the blogger cheap shots, Witt also talked about Kevin Love's minutes, cutting down the playbook, and his NBA coaching influences (the Czar of the Telestrator in case you are wondering). It's a pretty interesting listen and you should go check it out if you haven't already.

Beyond that, enjoy Thanksgiving.  I'm not going to be around for tonight's game thread or for a recap tomorrow.  We'll have new content available on either Friday or Saturday.  In the mean time, eat some good food, enjoy some good basketball, have fun with friends and family, and we'll see you later.

PS: Don't forget to check out fellow SB Nation blog Bright Side of the Sun for all your Suns-based needs.