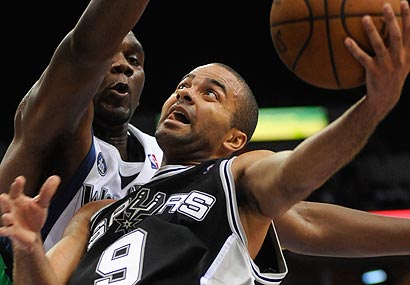 55 points. 10 assists.  Last night Mr. Longoria made the Wolves' defenders look like a bunch of desperate housewives; scoring at will and doing whatever the hell he wanted with the ball.

Parker scored his points the old fashioned way: off the pick-and-roll.  Watching him rack up point after point after point off the p-n-r, I was reminded of Mariano Rivera and his cut fastball.  You know it's coming.  You know exactly where it will be.  Yet...you can't do shit about it.  Well, not me but you know what I mean.  For all the genius of Greg Popovich, without Manu his team has been effectively reduced to the high school level at the offensive end...which doesn't really say much about the Wolves' defense or their ability to make in-game adjustments.

Tony Parker is a career 31.4% shooter from beyond the arc.  Last year he shot 25.8% on only 66 attempts.  Outside of being a shining example of how Sebastian Telfair should approach the long ball, Parker does have a somewhat long history of being unable and unwilling to shoot the 3.  While he went 2-3 from three last night, when he's lighting it up from mid-range and the paint, you simply have to take your chances somewhere else and it was beyond baffling that the Wolves didn't institute some pretty basic measures to make sure TP didn't 'get his' to the tune of a double nickel and 10 dimes.

And so we come back to 1/2 of the Wolves' Randy Problem.  With Randy Wittman at the end of the bench, I think I saw the first flash-to-the-point-of-the-pick double team sometime in the 1st overtime.  I don't think I saw one time during the night where a hard foul was delivered at either the pick or in the lane.  Blow up the screen?  Never tried.  Tony Parker is one of the league's worst 3 point shooters.  The Spurs are without their most dynamic offensive threat.  Tim Duncan is on the downside of his career.  Roger Mason isn't going to kill you (and even with 26, he didn't).  I don't care if you have to triple team the pick, with guys like Bowen, Oberto, Thomas, Bonner, and an advanced Michael Finley, you take your chances elsewhere.  Again, when the opposing team is doing nothing more than running a high-school level--hell, playground level--pick and roll and you do nothing to adjust for 4 quarters and 2 overtimes of play...well, c'est la vie with Witt.

As for the other 1/2 of the Randy Problem...Randy Foye had his best game of the year and it really wasn't close.  Throughout the game, Foye did his best to blend into the offense, handing out 9 assists while grabbing 5 rebounds.  He only had 2 turnovers but they came at the most inopportune time of the game and were the  results of brain farting.  Foye was most effective at the 2 guard when he was able to operate without the ball and not have to worry about keeping the pace, calling sets, and other assorted PG duties.  Foye hit 2 huge shots down the stretch and while it wasn't enough, it was very nice to see him hit something of a stride and you could almost see the confidence ooze back into him when he hit his last 3.  If Foye can play the 2, he has value to this squad.  I just want to make it perfectly clear that the Foye part of the Randy Problem is his play at the point.  He is not, will not, and should not be expected to be this team's starting point.  I am not targeting him as a player; rather, the situation he has been put in by the front office.

Speaking of real points, Sebastian Telfair made his way back to the court last night and the team responded by playing its 2 best quarters of offensive basketball when he saw the most amount of court time in the 2nd (31 points) and 4th (35).  Inspired by Parker, SeBass attempted zero 3 pointers, drove the lane, and kept the pace brisk.  It would be very interesting to see how Bassy and Foye's on/off pace stats look.  From just watching the game, it seemed obvious that the pace picked up with Bassy at the point and the Wolves were able to finally do what they were built to do: play up-tempo offensive ball built on in-and-out and high-and-low.

Speaking of in-and-out, last night was the first time all season I can remember Mike Miller setting up on Al Jefferson's side of the court and the two worked on some give and take depending on the defense.  Last night was also the first time I can remember Wolves guards causing havoc in the lane and either kicking out or dumping off to the open player.  They had 35 assists on 47 buckets.  That's the sign of good team ball.  It's also the sign that a professional point guard was playing at some point during the game.  Also, by going high/low and in-and-out, the Wolves did something they haven't done all year: they spaced the court.  Imagine that.  Their offense did something geared towards their personnel, and it only took the entire preseason and 3 regular season games for it to happen.

Let's finish this thing off with some bullet points:

All in all, the Wolves are 1-3 while not yet showing up for a full game of respectable offense.  Their competition has been terrible and they should be at least 2-2, but the product is still going in the right direction.  Witt has no business coaching at this level and Foye isn't an NBA point, but the rest of the team is solid and entertaining.