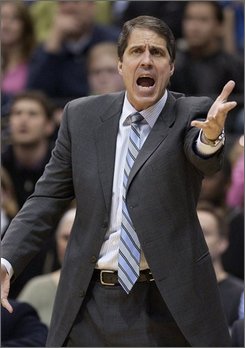 On a night marked by a new starting lineup, the Wolves let their new bench get them  destroyed.

With the Wolves down by 4 midway through the 3rd, the Kings made a change to their big scoring lineup by putting Spencer Hawes in for Miiki Moore, and Randy Wittman, in all of his career .333 winning percentage glory, proceeded to trot out his team's worst imaginable defensive lineup.  He then watched from the side as the Kings rattled off an impressive run while Randy Foye, Craig Smith, Rashad McCants, and Mike Miller waved red flags at the Kings players as they ole'd their way to the front of the rim.

With things getting rapidly out of hand in the 3rd, it was clear to everyone watching the game that the Wolves needed to do something.  Hell, we were talking about it in the game thread.  Here comes the run.  What will they do to counter? Answer: nothing.  Wittman didn't even bother to do much after the end of the quarter; running out a mini lineup of Foye, McCants, Bassy, Smith, and Gomes at the start of the 4th.  Really?  I especially enjoyed watching Gomes go up against the 7 foot Spencer Hawes. This lasted all of 1:30 before the Wolves were forced to call a timeout.  They then went on a 12-2 run with Love, Jefferson, and Miller back in the game.

Speaking of timeouts, I had to watch Kings coach Reggie Theus call two of them in the 2nd half when his team was embarrassed a bit too much on defense.  Imagine that: a coach stopping play when it becomes obvious that his guys aren't playing well.  Ho-hum.  It isn't all Witt's fault.

In fact, Witt is to be commended for finally cutting the Foye-at-the-point experiment loose.  If this team isn't going to win 42 games (and it will not), he may as well take as many parting shots at the Kevin McHale-created faults as he can.  Foye at the point is about as realistic as 42 wins.  Wittman will always have my respect for getting this team to play hard through 82 games last year.  However, his job status--like the idea that Foye could be an NBA point--says more about the front office than it does about either of the Randys.  The team's Randy Problem isn't really a Randy problem at all.  At the end of the day Witt should have never had the job and Randy should have never been a starting point.  This is the last time I'll write about it until the inevitable coaching change.

BTW: The Kings announcers actually dropped a "McHale is unfairly criticized" line during last night's contest.  Seriously.  Also, while we're talking about McHale and front office decisions, how fast would this team be blown up if a non-country club GM were brought in?  Now you can imagine how folks in the Bush Administration's Department of Justice are feeling with a new crew on their way in the door.  Unfortunately for Wolves fans, si se puede is not hablo'd by Papa Glen.  There's no need to hide the torture memos when Freddy Hoiberg will simply take over for the guy with all the blood on his hands.  With all the talk about socialism lately, the Wolves are more of a legacy communist regime.  Your DPRK of the NBA, if you will.

Getting around to the positives, Kevin Love is already the best player on the team and SeBass is a major league point guard.  Both players give the Wolves their best chance to win on both ends of the court at their respective positions.  They both play help d; as Love is the only player on the squad to have his hands in the air when the perimeter is broken down and Bassy is the only player on the squad to double down for help on the post.  Bassy has added several change-of-pace moves to his repertoire and he is the only perimeter player on the team that can be expected to properly set up a teammate on a pick and roll and hand off in the lane.  From positioning to passing to help defense to spacing, Love has already far exceeded Jefferson's all-around front-court ability.  When Love was off the court, the Wolves downright sucked on both ends of the court.  This casual observation is backed up with his on/off numbers.

Love has now gone up against the likes of Dirk, Duncan, and Miller.  He is by no means getting schooled.  In fact, he is often the glue that holds the Wolves together.  While he did go for a few Brad Miller up-fakes, he also dished out his fair share to the big hayseed from Purdue while showing the Kings' bigs that he could throw his weight around just as well as they could.  It is zero surprise that Love had a neutral +/- in a game where the team gets blown out.

Sebastian Telfair, in his 2nd game back, was a -5 with 15 points on 5-12 shooting and 0 turnovers.  He took 3 too many 3s (1-3) but he often found himself with the ball in his hands with time running off the clock.  Surprisingly enough, this was more the result of players like Miller and Foye dishing out to him late in the possession rather than him dribbling around without purpose.  Let's wrap this thing up with some bullet points:

I can't stress enough that while I write posts entitled "Pathetic" and while I go on and on about the Randy Problem, this team isn't as bad as it seems. Frustrating, yes; fundamentally flawed, maybe; going in the wrong direction, no.  They are starting to score some points.  They have a real point in the starting lineup.  They finally drafted a stud.  They are getting to the line on a level above and beyond what they did last year.  They are 1-4 but they're not far away from some wins.  They have been running out some mind-numbingly bad rotations and their team defense is atrocious.  These are correctable problems and they can make it work.

As I mentioned earlier, I'm done talking about the Randy Problem.  We know that the coach is in over his head and that Foye isn't a starting point in this league. There is no sense in dwelling on this any further.  Moving forward, we'll talk more about what is working and what the team can do to start turning things into wins. As always, the subject of the front office will not be taken off the table.

UPDATE: Witt shows the limitations of his Bobby Knight approach in this morning's Strib:

"I played the game I hated to play," Wittman said. "If we're not going to play any more [defense], individuals have to be held accountable."

Jefferson was asked about being removed from the game and about the message Wittman sent him and teammates.

Telfair, who started in his second game back from a three-game suspension, said Wittman's coaching intentions were clear Friday.

"Strong message," he said. "Guys want to be on the floor."

It's one thing to not see an effort.  It's quite another to see a rookie with 5 games of experience already be your smartest and best coached player.  Witt can yell at these guys until his face turns blue.  Trying hard isn't going to get Al Jefferson to realize that he needs to seal his man off on a weak side rebound or stick his hands straight up in the air when his opponent has beat him off the ground.

UPDATE ii: Chris Richard taken with the 1st pick in the D-League draft.