Share All sharing options for: Game Day: Our 4-times-a-year reminder 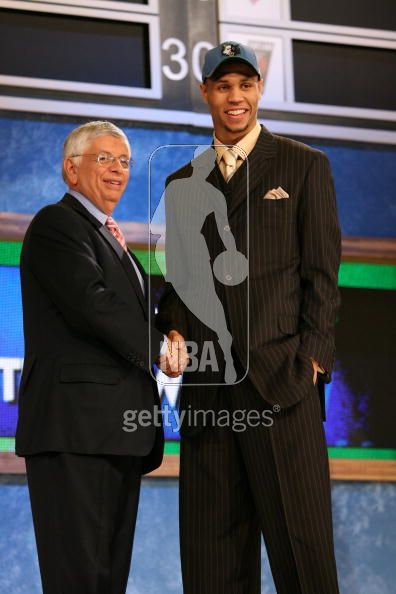 In a contest matched in its ability to rankle Wolves fans only by yearly trips to Memphis (Rudy Gay) and Boston (KG), the Wolves head to Portland tonight to face the better 1/2 of the Randy Foye draft sandwich, Mr. Brandon Roy--who is hot off of one of the best game-ending shots you will see all year.

Will the Wolves stick with their new starting lineup?  Will we see a Shaddy/Telfair backcourt at some point during the game?  Will Al Jefferson, Mike Miller, and Randy Foye attempt to play defense at any point during the contest?  Will Sebastian Telfair continue to impress?  Will Witt continue to roll out 1:45-2:30 rotations?

The answers to all these questions and more tonight at 9.

Blazer's Edge has an interesting preview of the game.  Dave correctly identifies the 3 players that should represent Minny's "Big Three" (Jefferson, Miller, and Foye), but he takes a slight turn with his take on the rest of the roster:

The other major players are almost all forwards.  Kevin Love is the shiny, new draft pick who’s only shooting 43% so far.  Ryan Gomes is a solid forward and one of ’s only decent shooters but is starting to lose time to Love.  Craig Smith is a journeyman who is now buried in the power forward shuffle.  Small forward Corey Brewer is turning into a decent defender and rebounder but still struggles to shoot and score.  Athletic shooting guard Rashad McCants, burdened by past injuries and the lack of a perimeter game, has never lived up to his draft hype.  The ‘Wolves are thin in the backcourt and overstocked in the frontcourt.  Like an unbalanced plan they’re struggling to stay aloft.  At 1-4 with losses to the Thunder and Kings that ground is getting mighty close.

It's always interesting to read non-Wolves fan perspectives on the squad.  Gomes is decidedly not one of the team's only decent shooters.  The Rhino isn't a journeyman and McCants is a complex enigma that doesn't translate well to quick bullet points.  Their problem hasn't been that they're unbalanced; rather, that their coaches and the front office want to have it multiple ways with their system and personnel.  One would think that a team with three 40+% 3 point shooters and 2 guys who can operate in the paint would be focused a bit more on a spread offense geared around high/low and inside/out.  However, Witt has them focused on slowing down the pace and making defensive stands.  Dave does have some very interesting things to say about the Blazers' keys to the game:

1.  If you either slow down Al Jefferson’s scoring or match him point for point you should be able to beat the ‘Wolves.

2.  This is one game where should dominate on the boards.  If they rebound like they did against the Rockets on Thursday they will squash flat.

3.  Deny the middle and make the Timberwolves score from the perimeter sidelines.

5.  Speaking of passes:  two decent ones in any possession and you’ll have whatever shot you like.

I'll again point to the ridiculous nature of the Wolves' approach so far this season.  With Mike Miller, Rashad McCants, Randy Foye, and Kevin Love, there is no way on God's green earth that opposing teams should be wanting to see the Wolves score from the perimeter sidelines.  Miller, McCants, and Foye are all outstanding spot up shooters, and Love is deadly from mid-range (his lower FG% comes mostly from a single bad shooting game in which he went 4-13 from the field; he's 15-24 outside of that).

The keys for the Wolves are simple:

Also, increased pace, more gambling perimeter defense, and some attempts at transition play are desperately needed by Our Beloved Puppies.  Here's hoping for the best tonight in Portland.