Share All sharing options for: Quarter Pole Draft Board 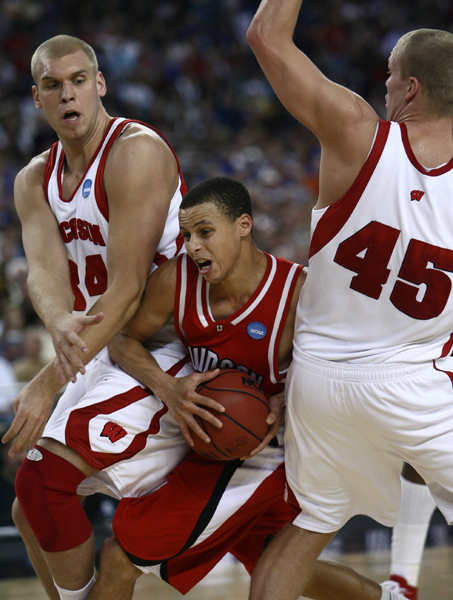 It's that time of year again: time to update the 2009 Draft Board.  You can read our initial list here.

Let's give it a go once again:

As you may have noticed I removed Ricky Rubio and Brandon Jennings from the list.  At this point in the season college ball is well underway and I simply do not have the access or know-how of putting together realistic takes on European players compared to their university counterparts.

As things stand right now with Our Beloved Puppies Zombies, their most glaring needs are still out on the perimeter.  As much as there has been a constant push to surround Big Al with a shot blocking, defensive-minded center, this team still finds its greatest weaknesses at the 1 and 3:

Despite what many fans would like to see, I just can't see a scenario where Randy Foye isn't a part of this team's future.  This would seem to suggest that the team's greatest need is either a true point or a fellow combo guard that could share some of the ball handling responsibilities.  If you look at the internals on points and free throw attempts, I think it is fairly obvious that this team needs an upgrade in the backcourt and at the 3.

Unfortunately for the Wolves, this draft isn't exactly shaping up to be a 3-filled affair, with Earl Clark and Chase Budinger being the only SF candidates at the moment worthy of a lottery pick.

The draft is even thinner at the center position, with Hasheem Thabeet being the only legit 5 prospect in the lottery at the moment.

Of course, not all is bad with this draft.  While it is fairly thin at these positions (and in general), it does offer the Wolves some intriguing guard prospects: Harden, Curry, Calathes, Evans, Green, Ricky Rubio, Brandon Jennings, Jrue Holiday, Demar Derozan, Ty Lawson, and Patty Mills.

Getting around to our top five picks, here is a statistical comparison of the players in question.  Right now I think the Wolves' top pick option is a two man race between Curry and Harden.  Both players offer the Wolves an interesting compliment to Foye.  Right now I'm giving the nod to Harden.  He does a number of things that place him above Curry at the moment.

First, his size is something the Wovles need.  6'5" and 218 is automatically preferable to Curry's 6 nothing/180.  Harden is also every bit the scorer as is Curry, averaging slightly more than the Davidson star in per 40 pace adjusted points.  Harden doesn't carry nearly the load as does Curry, but he gets to the line at a much greater pace while relying far less on the short college three than the son of Del.

Curry is no slouch.  He is taking to his time at the point by posting an extremely solid 4.55 ppr as well as a remarkably low turnover rate for the amount of time he has his hands on the rock.  He takes an awful lot of 3s and he doesn't get to the line as much as you would like to see, but he still boasts one of the best jump shot games in recent college memory.

Moving down the list, I would like to start pointing our readers in the direction of Danny Green.  Mr. Green is playing on a fantastically talented team and he doesn't have the huge net numbers of Curry or Harden, but if you break down his internals, he is doing some things that are deserving of our attention.  First of all, he has great size and athleticism.  He would immediately give the Wolves an athlete that could fill the 2/3.  He doesn't get a ton of looks on a talent-laden team, but he does the most with his possessions when given the chance.  Green has the 3rd best PER and EFF/40 amongst our top 5.  He scores the most points per play as well as carrying a solid 2.78 a/to and 3.81 ppr.  If you break it down to possession, he is scoring 1.42 pts/poss.  That's very, very good.  He is an active defender who is also able to hold his own on the glass.  His big downfall is that he simply isn't getting to the line.  This is a concern. Granted, on a team like UNC, there aren't exactly a ton of shots to go around across the board, but you'd still like to see more than 0.6 FTA/game.

Evans and Calathes are sort of a push at the moment.  I'm expecting Evans to come on late in the year as he adjusts to Memphis' offense but right now they are putting together the beginnings of two very nice years.

As for the rest, I'd be interested to hear what you have to say about guys like Thabeet and Clark.  I think Clark has the sort of rounded game potential that would work out well at the 3.  Thabeet is...well, I don't think I'll ever get over my uneasiness with him.  That being said, Hoopus is lucky to have SB Nation's leading Thabeet drum beater Wim in its readership and he is forcing me to give Thabeet 2nd, 3rd, and 4th looks.

That about does it for now.  What say you?  Who did we miss?  Who should move up or down?

PS: I ignored the Blake Griffin question.  Right now, he's the clear #1 pick.  If the Wolves magically win the lotto and he has continued his production throughout the year, I think the team would seriously need to consider trading Love or Jefferson.  I think you try to move Big Al if such a situation came to pass.  My list is tailored to the Wolves' draft needs as well as an assumption that they won't draft #1.