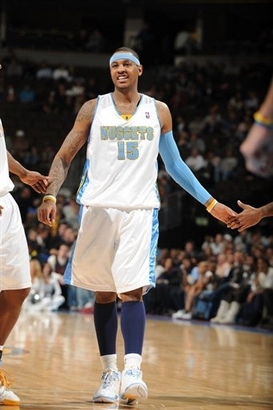 There are only three teams in the NBA that I just straight-up do not like: the Lakers, the Blazers, and the Nuggets.  LA stole our championships, the Blazers stole our luck, and the Nuggets...well, they just plain suck.  I hate the baby blue, I can't stand watery Colorado beer, Chris Andersen is a hockey goon in basketball shorts, their announcers are more homerish than Hanny and J-Pete, and I think the Melo/AI experiment was one of the dumber personnel moves in recent NBA memory.  That being said, last night's game was simply a pleasure to watch.

The Wolves came out and built a big lead, Melo went nuts in the 3rd, and both teams played up and down in the 4th.  It didn't work out for the good guys but I can't remember a more entertaining 2nd game of a T-Wolves back-to-back.  We Wolves fans haven't seen a guy go off like Melo since Tony Parker.  And there's the rub.

I'll ask it again: Is this the team we thought we were getting at the beginning of the year or is it more of the same?  Did the Wolves just lose a game in much the same way they lost to San Antonio during Witt's tenure or have they changed (for the better) and simply run up against one of the great quarters in NBA history?  Let's take a look at the Four Factors of last night's game:

As they have been doing for a while, the Wolves have been dominating the offensive glass.  Last night they won the offensive glass battle 15-13.  They were out OReb'd in the 3rd to the tune of 4-1 but all-in-all they are absolutely rocking the o-glass since Jason Collins has been retired to the end of the bench.

The Wolves played an effective pace, maintained a solid OE rating, and got to the line a fair amount.  While the patient is certainly sick with only 4 wins, the internals are improving, and if the Wolves continue to play like they have in the last 2 contests, the wins will come (although, maybe not against San Antonio and the Lakers during the next two games).

They lost last night because they turned the ball over without forcing steals of their own, a big-time free throw differential, and an unconscious Carmelo Anthony.

Changing gears, after having a few days to think about the recent coaching move I'd like to go back and highlight something I asked in my initial reaction to the change:

What if the Wolves play .400 ball down the stretch?  If they played that well from the get-go we're talking about a 32-33 win club.  Is .360 ball enough?  That's a 31 win pace over 82 games.  How about .340?  That's still a big improvement over last year and it would be right in line with what historical averages suggest as an improvement for a team as bad as what the Wolves were last year.  Ultimately, this nasty little possibility raises some fairly uncomfortable questions for those fans who believe Papa Glen pulled a Godfather and placed a horse's head at the end of McHale's bed by moving him out of the front office.  The Godfather option depends on the Wolves achieving the worst possible options both on the court and in the front office.  In order for it to work, McHale has to be bad enough as coach that he will simply walk away at the end of the year.  More troublesome is the fact that it also means that the Wolves are so bad that they can't even win/improve in the style of play that they were built for.  Like it or not, McHale has these guys playing like we thought they would from the beginning of the year.  We all know he was a failure as a GM, but now the owner has a large chunk of his fans rooting for him to be a failure as a coach as well.  That's bad juju.  It's f-ing with basketball karma every bit as much as is trading Brandon Roy for cash.  Perhaps it's simply a solid reminder that the big problem with this team all along has been the owner.  A culture of boobery abounds at 600 First Avenue.

Personally, I'd love to see McHale put this team on track to .360-.400 ball.  That's in the range of a 32-win pace over 82 games and it would be pretty interesting to see a coach bring about the equivalent of a 10-game improvement with this squad.  If you think about it, this is the best possible outcome for the squad at this point.  They win about 21-22 more games, end the season at 26-56, likely keep their Clipper pick, and...well, I'm not going to give you the last conclusion.  I'd just challenge you to find another coach who can bring about a 10-win improvement pace.  And there, once again, is the rub.

For a Nugget-take on last night's festivities, please check out our sister site, Pickaxe and Roll.