Share All sharing options for: Land of 10,000 Lakes vs. Urban Wasteland 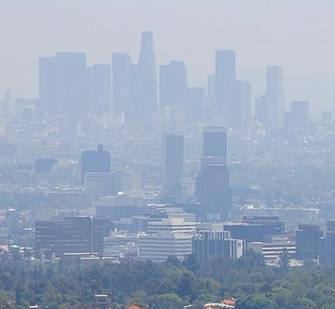 While I don't claim the area as home, I was stationed for a year and a half in Monterey at the Defense Language Institute and if forced to choose between the two, I'm a northern Cali guy all the way. Our weekend vacations almost always went up, not down.

Tonight, Our Beloved Zombies go up against the former Minneapolis Lakers LA Smog. (One would figure that upon moving to LA the team would have picked a prominent local feature.)

LA is part of our NBA triumvirate of disgust (Denver and Portland being the other 2). They stole our team, the league made up free agency rules to land the Big Diesel in LA, last season they were the recipients of one of the most lopsided "trades" in NBA history, and...well, I'm sure the league has plenty more in mind for its 2nd favorite franchise. Did I mention they stole our first franchise?

Anywho, we can't be completely mean to LA. Former Wolves reporter Mike Trudell is now with the Smog. Since his departure the team's website has gone to the dogs. Mike was a stand-up guy and we always appreciated his interaction with the site. We also conducted an on-line interview with Andrew and Brian Kamenetzky of the LA Times' Lakers Blog and ESPN The Magazine. You can read the interview here. Their site has excellent content and if you want a solid example (other than Zgoda) of what a major newspaper basketball blog should be like, you need to look no further. Good stuff.

Here are the keys of the game for a Wolves victory:

In all seriousness, if there ever was a game where the team absolutely needed to go with up tempo zombie small ball, this is it. Run, run, run, run, run, and keep Pau Gasol and Andrew Bynum as far away from the basket as possible. 5 out and 4 out/1 in sets are needed in this bad boy.

Enjoy the game and today's game thread topic is favorite movie comedies. From absurdist to D&F gross outs, please leave your favorite comedy in the comments.

PS: Also, tonight would be a good night for Mega-Deal Monday trade proposals. Tomorrow is December 15th and that means NBA free agents who were not signed in the last 90 days can be traded. This means you Ryan Gomes, Craig Smith, and Bassy Telfair. My personal favorite is Mike Miller + Brian Cardinal to Cleveland for Wally + JJ Hickson.

Enjoy the game and remember: let's make the best of this thread and fill our Netflix accounts with our favorite comedies.