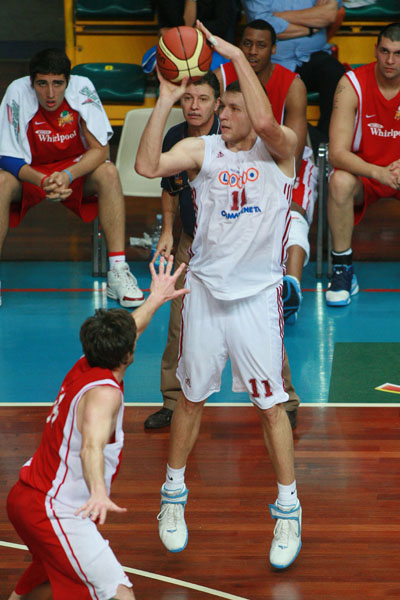 The TImberwolves had three 2nd rounders to use in the 2006 draft; with #36 they took Craig Smith and with #37 they took swingman Bobby Jones, who was promptly traded to Philadelphia for cash and the pick used in 2007 on Chris Richard. On a side note, Jones has been involved with 9 NBA teams already in only 3 seasons.

The Wolves also held #57, which could have been conveyed to Detroit to complete the trade for Ronald Dupree (and wasn't that a worthwhile investment?). Instead, they put off their debt to the Pistons and chose Greek center Loukas Mavrokefalidis. Since the pick they'll have to give Detroit this year will likely be a bit better than #57, I've taken every opportunity to whine about this decision.

But now that my requisite gripe is out of the way, it seems that Mavrokefalidis is making some waves in the EuroCup this year with his team, Greek squad Maroussi Costa Coffee. Coincidentally, jianfu favorite Pat Calathes plays for Maroussi.

First, a bit about the team. The Maroussi athletic club was founded in the eponymous suburb of Athens in 1896, making it the third oldest in Greece. The basketball club was founded in 1950 and has ben the preeminent program since. The team has been strong historically, although it's never approached the heights of fellow Greek squads Olympiacos, Aris and Panathinaikos.

Maroussi is 1-2 in EuroCup play so far, with Mavrokefalidis starting all three at center.

So he's putting up good scoring numbers (career high average), respectable rebounding numbers and a few blocks. But what I'm having trouble finding an answer to is why Mavrokefalidis has moved around so much. In fact, Maroussi is his 5th team since 05/06 and it's actually a demotion of teams since playing with Olympiacos.

Maybe there's a good explanation for that, but Mavrokefalidis is already 25 years old and hasn't shown steady growth. Beyond that, what does Pekovic being drafted mean for Loukas? Even if Big L makes over in a year or two, if Love, Jefferson and Pekovic are on the team, where's the space? Without having actually seen him play much, the stats say that he's more of an offensive big man than a post presence (on either side of the court). That's not exactly something the Wolves should be in the market for.

I don't want to completely write Mavrokefalidis off, but between his lack of signifcant development, skillset and the Wolves' outlook in the frontcourt don't look good for him.