Share All sharing options for: The Mike Miller Farewell Tour 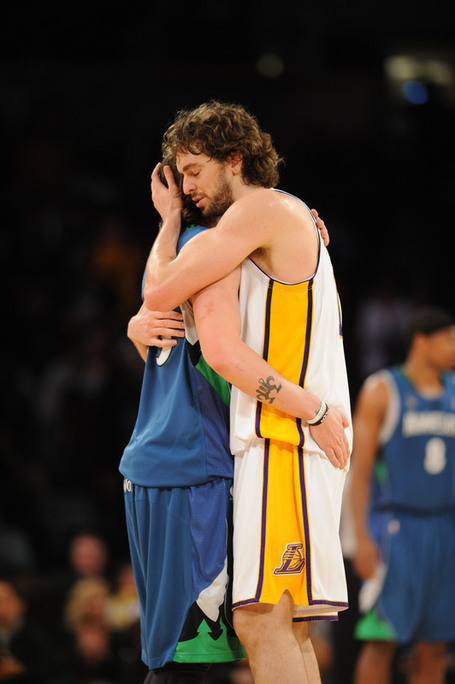 Before I go on, it's time for some personal accountability here at Hoopus.  At the time of the O.J. Mayo trade I wrote this:

Wow.  That's highway f'ing robbery.  That's worse than the Lakers deal.  They just cleaned out the Wolves' entire stash of bad contracts with an expiring deal (Collins) and a 1/4 way serviceable bench player in Cardinal.  Miller pushes this thing way over the top.  That's an amazing deal for the Wolves.  I went from hating this draft (thanks to the insane Chalmers trade) to being a big fan.

Because of this over-the-top paragraph, I had highlighted each and every single Laker and Memphis game on the schedule in the event that I could crow or, in this case, eat crow.

I still 100% believe that Kevin Love is going to be a fantastic player in this league.  I've never held any illusions that he will be a superstar but he does have the makings of an upper-level glue guy; the type of player that can really bring together a fantastic team.

What I didn't believe is that O.J. Mayo had the makings of an upper-level NBA scorer who could jettison the bad things (turnovers, lack of free throws, inability to score without jumper) associated with his college game.

Perhaps the thing that really put the deal over the top, for me, was the addition of Mike Miller and the subtraction of Antoine Walker and Marko Jaric.  Getting to the point, I still think the Wolves made the deal they had to make; just like the KG deal was the deal they had to make.  It's just no where near the highway robbery I said it was at the time and I was completely off on that take.  There's no other way to put it.  It was a terrible, no-good, awful prediction and I was wrong to make it.  Accountability is something that I think is important to this site and I just wanted our readers to know how badly I got it wrong with the Mayo/Love trade.  Consistency and accountability are two things I hope you will always find on this site.

Still, if this team does not pull off the Love/Mayo trade, I think we're looking at a team filled with Toine, Marko, even less outside shooting than it already has, even fewer serviceable big men, and a high-scoring rookie guard under the direction of one Randy Wittman.

Here is my big fear with the Love/Mayo deal: Love becomes the whipping boy for Kevin McHale's sins as VP of Basketball Operations.  After the 99 Draft, Joe Smith debacle, McCants over Granger, Foye over Roy, and Brewer over Young, one more too-cute-by-half McHale selection was too much for fans to handle.  Regardless of just how good a player he took (it could have been Brook "he had his shot blocked by J-Pete" Lopez or DJ "he's way to small for the Wolves" Augustine) the aftermath of this particular deal will be weighted down with the aftermath of not just one selection, but many.  The way things are headed with Mayo, Michael Beasley may not have even been enough to stem the anger.

Kevin Love is a year removed from high school and he is averaging 10/10 with nearly 5 Oreb over his last 10 games off the bench and in 25 minutes of play.  He is a better passer and help defender than the team's best player.  He doesn't turn the ball over a lot and he can get to the free throw line.  He's doing so on arguably the worst team in the league that just went through a coaching change less than 20 games into the season.  Does he have issues with man defense?  Yes, but on a team with Mike Miller and Al Jefferson, you have to play mental jujitsu to assign things to Mr. Love that cannot be turned around on the team's veteran leadership.

Getting around to last night's game...well, you've seen it before.  Bad shooting, a general lack of talent, nice work on the offensive glass, a somewhat close game for 2 1/2 or 3 quarters, and then an opponent who suddenly decides to try and put the game out of reach.  It's like the plot to some bad move we've all seen one too many times.

Enough movies.  Let's take a look at the Four Factors:

Yes, the Wolves almost broke basketball's equivalent of the Mendoza line with a 41% eFG.  Here's how Yahoo Sports led off their coverage of the game:

LOS ANGELES (AP)—Playing a bunch of teams with losing records isn’t exactly bringing out the best in the Los Angeles Lakers.

But for the most part, they’re winning.

At least the bad plot has made national news.

I honestly don't know what to write about these games anymore.  The Wolves typically blow their opponents away on the glass (especially on offense), they perform well enough at the line, they have a decent pace (although last night it should have been much quicker), and they get done in by horrible shooting and opponents who suddenly "turn it on".

Defensively, OBZs were lucky the Lakers decided to only play 15 minutes of good ball last night.  Upon the Wolves taking a small lead midway through the 3rd, LA went on a 10-0 run to end that nonsense before going on a 5-0 and a 6-0 run midway through the 4th to put the game away.  You could see it coming.  In the game thread we joked about how teams don't have to try for 3 quarters against the Wolves and can still walk away with a 10-point victory.

Following the coaching change I took note of the increased effort by the players under new coach Kevin McHale.  I also took note of the fact that it's pretty damn hard to play "fun" while losing a ton of games.  League Pass spared me the trouble of having to listen to J-Pete and Hanny, but I wonder if they are still talking about McHale's Fun Ball.  Free-wheeling ball is great to play when you're ahead.  Not so much when you're losing 10-15 in a row.  Speaking of which, if the team doesn't win on the 2nd night of a B2B against Sacramento tonight, their next 3 games are against Cleveland, Houston, and San Antonio.  That's probably 13 losses in a row before they run up against their next winnable opponent (New York) on the 26th.  After the Knicks, they play Orlando and then a home and away B2B against Memphis and Dallas to end the year.  In other words, they have a very real possibility of ending 2008 in exactly the same way they ended 2007:

Again, if they can't walk away from [the pre New Year] schedule with more than 4 wins, something is drastically wrong.

Something is most certainly drastically wrong.  Which brings us all the way back around to the picture and title of this post.  Mike Miller shot the ball 6 times last night (2 of which were down the stretch when it didn't matter).  He didn't bother to play much of any defense and while he may be struggling to come back from a bad ankle injury, it's becoming more and more apparent that he is a luxury this team cannot afford.

Today marks the first day that free agents signed over the summer can be traded.  This means Craig Smith, Ryan Gomes, and Sebastian Telfair can now be used as (relatively) meaningful assets.  This team needs to do something.  The status quo isn't even close to being average or acceptable.  No one on this team should be considered untradable, Big Al included.  Since it is a Mega-Deal Monday, here are a few trades I'd try to pull off in Fantasy GM Land:

To the Wolves: Steph, Knicks' #1 pick

To the Griz: Lamarcus Aldridge

Well, that about does it for today.  These games are getting harder and harder to watch, listen to, write about, and, I'm sure, read about.

PS: If you haven't already, please take the time to read the latest Diary of a Madman Genius Coach from Peter.  Also, don't forget to check out my interview with the Kamenetzky brothers here.

UPDATE: Whenever I put up a Mega-Deal Monday post or a tidbit about nobody being off limits, I tend to get a few emails about how the team shouldn't blow anything up and that Al Jefferson is an All Star.  I'd just like to clarify a few things with a comment I made in a recent post:

I’m not advocating a Jefferson trade but no one should be off limits at this point. Unless they have some inside-the-locker room notion that he’s more than an empty 20/10 that can lead a team, he shouldn’t be untouchable. Ideally, I’d like to see them keep Foye, Jefferson, Brewer, and Love. I think they need to move whatever they can for Wallace and then shop Miller to Cleveland, Portland, and LA. Then, all mega-deal Mondays and for-the-sake-of-it arguments aside, I think they sit on what they have, lose a bunch of games, and hope for the best in the lottery. My ideal scenario is that they walk away with a real guard, a solid 2/3 like Danny Green, and a defensively proficient 4/5 or 5 (whether by draft or trade).

I put up Mega-Deal Mondays because it's fun to speculate about trades with a 4-win team.  However, if pressed to give a 110% serious take on the matter, I think they try their best for Wallace, move Miller, and then sit on a bunch of losses until the draft.  Guys like Gomes, Smith, McCants, and Bassy shouldn't get in the way of making these two deals happen.  Patience is key here and there is no need to panic, but you need to realize that they're dealing with a very limited number of remotely average players.  It's frustrating as all hell and that's why we speculate about the draft and trades here on Hoopus.  However, I can't say that I disagree with too many moves this team has made since the KG trade.   It's one thing to say that they should have fired McHale or drafted Mayo, but it's quite another to deal with the situation that would have been left behind in the wake of those two decisions.  The team is paying for over a decade of piss-poor general management.  The upcoming draft and the (likely) selection of the next coach will be the ultimate test of Jim Stack, Fred Hoiberg, and Rob Babcock's collective worth.  That being said, they shouldn't turn up their noses at any deal at this point. When you're this close to the bottom, nothing is sacred.