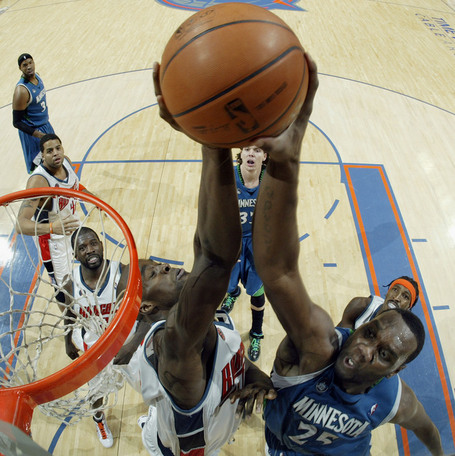 When asked why he turned to Cardinal, Wittman said: "I knew he was going to go in there and do what we were supposed to do defensively. Same with Kevin."

Zgoda on his Wolves blog:

I made a rookie mistake at the game’s start and took just one pen with me to the press seating area near the top of the first deck at what used to be called Bobcats Arena. Of course, the pen ran out immediately. Halfway through the first quarter, I went back downstairs and followed the maze of hallways underneath toward the press room. As I turned into the corner, I literally ran into Michael Jordan, one of the Bobcats’ owners. He was wearing, of course, a really nice suit (gold, I think) and looks like he has gained quite a bit of bulk since his playing days.

"There are going to be nights you don’t have it offensively," coach Randy Wittman said. "If you don’t continue to do things at both ends of the floor, then you can’t play. I’ve got to find people to play."

Wittman's starting to call out his players. That's either a sign of a coach worried about his job or of players tuning him out. Or both.

Brit weighs in too:

This trey has not been kind to Wittman. Quite frankly, it is much easier to criticize him right now than to find positive signs. No doubt Kevin McHale is compiling his own ledger of positives and negatives as he follows the team. But let's keep some perspective here. McHale engineered the ouster of Flip Saunders after he judged that Flip could no longer handle a roster that included Garnett, Sprewell, Cassell, Szczerbiak, etc. Then he replaced Dwane Casey because he didn't feel Casey's 20-20 record and 8th seed standing in the playoff race demonstrated enough consistency with a roster that included Garnett, Davis, Blount, McCants, etc. Now the pressure is inevitably mounting on Randy Wittman because McHale has stated that a roster with Jefferson, Miller, Foye, Gomes, etc. should win 40 games this season.

It sure didn't look like a 90-point game. The Timberwolves had eight turnovers in the first quarter alone, and though Randy Foye (23 points, four assists) led the Wolves in scoring, he's still having a hard time balancing his passing and shooting instincts unless he's being guarded by someone named "Allen Iverson." There are only a few of those guys, and only one of them plays in the NBA. So he's got some work to do.