Share All sharing options for: Rapidly approaching the cliff 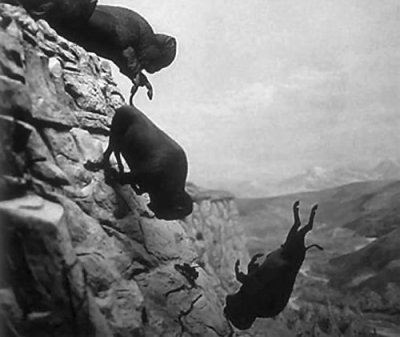 At 4-21 Our Beloved Puppies Zombies are playing .160 ball.  If they continue on this pace they will end the season with a 13-69 record, good for the worst record in team history.  I seriously doubt that they will meet this putrid mark.  As bad as they are, the dog days of the NBA should be filled with enough half-hearted opponents to give the Wolves a few March wins here and one or two April wins there.

What I do not doubt is that this year's team will not reach last year's total of 22 wins.  At the beginning of the year, many fans and observers believed that the Wolves could end up being a 30-win team, winning at a .366 clip.  Should the Wolves immediately convert into such a beast, they would end the season with a 24-58 record.  In other words, if they lose their next two games against the Rockets and Spurs, they will need a radical change of direction in order to scramble their way to the lowly win total of the 2007-08 campaign.

Even more disturbing is that even if they play at a modestly improved .250 pace, they will only win 14 more games, ending with an 18 win season.  Are the Wolves good enough to play with the NBA's sub-.300 clubs? We're talking about the Oklahoma City Thunder, Los Angeles Clippers, Washington Wizards, Golden State Warriors, Sacramento Kings, and Charlotte Bobcats of the world.  Against these titans, the Wolves are 2-6 while being outscored by a grand total of 62 points. Dog days or not, .366 ball, .300 ball, and even .250 ball seems like an awfully tall order at this point.

I mention this because we recently pondered how low can this team go.  With attendance down across the league, can the team with the 4th lowest home turnout take too much more of the status quo?  The casual fan is either dead or pulled off of life support.  The question now is determining where the apathy line is for us fans who simply love the game.  I take the Potter Stewart approach to this query: I don't know where that line is but I'll know it when I see it.  And no, the allusion to pornography (safe link) is not unintended.

I get the sense that this team is close to the edge of punching their one-way ticket to Seattle.  They are nearly irrelevant in the Twin Cities sports market.  Outside of the metro area it's even worse.  Were it not for my keen grasp of the internets, I would not be able to watch or listen to over 1/2 of the team's games, as I do not have cable and the team's local radio affiliate (KTOE) would rather broadcast high school hockey than a major professional sports disaster.  I don't blame them.  There's probably more ad revenue associated with a Mankato West hockey game than there is with Mankato's favorite son's team right now.

I get numerous emails from fans who have had it with League Pass Broadband, the team's limited radio network, and Channel 45's limited reach.  Here's an email from a non-metro fan from earlier in the month:

Hi Nate
I enjoy your blog.  I am writing because of the frustration you experience trying to view Wolves games after paying a premium to do so.  My complaint (which goes back years) is somewhat different.  I would like to be able to listen to Wolves games on the radio when I am in transit to various places.  I live...about 100 mi. from the Target Center.  I currently have season tickets to the games, but don't attend all home games due to the distance involved and other factors.  I don't have anything other than basic cable television and I don't have a problem with the number of Wolves games I can view on my TV (although the picture quality is poor).  The team's radio saturation is pathetic.  KFAN is not a station that I can pick up at night (even in my car).  The local stations that supposedly carry the team have weak signals and constantly pre-empt Wolves broadcasts for local sports.  St. Cloud is the closest city of size to me and their sports radio programming does not include the Wolves or even the Twins.  I am sure you can empathize with me when I tell you of my trip this past Friday evening up to my parents' home in Brainerd wherein I attempt to listen to the Wolves-Spurs broadcast and am relegated to either of two  Chicago sports radio programs, Wild hockey, or the Iowa-Iowa State college mens BB game.  Makes you wonder if the NBA truly is big league or not.

He was lucky.  During the Spurs game I think I was treated to the must-hear match-up of Bethany Lutheran v. Carol College.  Keep in mind that this gentleman pays for season tickets and basic cable.  I pay for 10-15 tickets a year + League Pass Broadband + basic cable.  Both of us are probably unable to legally watch 80% of the games that we do not attend. Channel 45 doesn't come with basic cable out here in the hinterlands...all 1.8 miles away from the team owner's house.

Bottom line: fewer and fewer people care about this team and it's becoming harder and harder to pay attention.

Where does your line lay?