"They must be satisfied with moral victories."

Share All sharing options for: "They must be satisfied with moral victories." 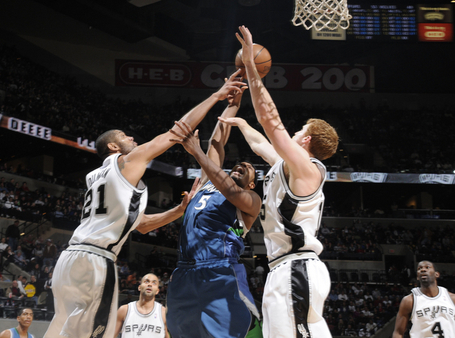 Those were the words of Spurs announcer Sean Elliot upon watching the Wolves' guards fail to foul Tony Parker with what can only be described as a s$%t load of time still on the clock  after working hard to claw their way back into the game during the 4th quarter.  It was the culmination of about 2 solid minutes of baffled announcing along the lines of "they've absolutely conceded the game," "that's why they're going to lose their 13th in a row," "that will drive Kevin McHale right back to a front office somewhere," and, my favorite, "didn't Oklahoma City do something like that the other night?"

I'll keep the game wrap short tonight this morning because yours truly is tired after wrapping up a long night of getting Santa's gifts ready for distribution, but this, to me, easily qualifies as the worst loss of the year.  The Wolves did not play poorly tonight.  At times they played stupidly, but not poorly.  They out-rebounded San Antonio 38-35.  They kept the turnovers close at 11-8.  They beat the hell out of the Spurs at the line (25-32) to (18-24).  They even performed admirably from beyond the arc, going (4-15) compared to SAS's (5-13).  Do you want to know why the Wolves lost last night's game?  The Spurs' defensive rebounding.  Period.

As I have gone over on many occasions, the Wolves are a poor shooting team who must rely on volume shooting and offensive rebounding.  There simply isn't any other way for a poor shooting team with this little talent to win.  Shoot, shoot, shoot, and hope that your scrappy collection of power forwards can get their fair share of offensive rebounds and put-backs.  Last night the Wolves grabbed 6 offensive rebounds. 6.  Because they are a poor defensive team that does not gamble a lot, they don't force a lot of turnovers.  Because they are a poor shooting team, they don't win many games with a high eFG%.  If you put 2 and 2 together, you will see that not grabbing offensive rebounds causes them to lose out on extended possessions  (i.e. additional shots), and even when they turn up the defensive intensity to negate the downturn in FGAs (which they did at times last night), it does not matter because their offense simply cannot make up for the difference without a hefty dose of Orebs.  You really have to love the Spurs.  They knew exactly what Minnesota's strength was and they attacked it.  At least the Wolves caused an opponent to try; not to simply roll over for 3 quarters before turning on the jets.  You could really tell that the Spurs were focusing on the defensive glass from the opening tip.

Let's wrap this up with some talking points:

Well folks, that about does it for now.  I'm going on hiatus for a few days to enjoy the holiday and I'll see you again later this week or on the weekend.