Close but no brains

Share All sharing options for: Close but no brains 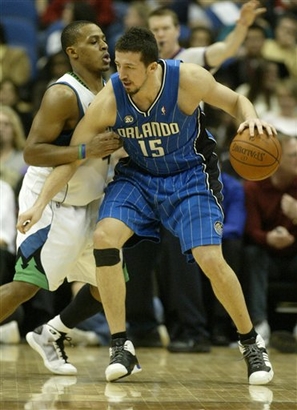 In yesterday's game wrap we also added limiting opponents' offensive rebounds and shooting over 47% from the field.

Here's how the Four Factors played out in last night's game:

No red.  Orlando is a tough, tough team and Minny was on the 2nd night of a away/home B2B and they didn't play as poorly as one might have expected them to.  There's really not much you can do about Orlando if Hedo and Lewis are hitting shots like they were in the 3rd and 4th quarter.

What this team could do is sit the hell down Kevin Ollie, Brian Cardinal, and the beyond worthless Mark Madsen.  Last night this trio took 22 minutes away from Sebastian Telfair and Kevin Love.  I like Kevin Ollie.  He is a professionals professional and he plays hard for his paycheck.  He's also a 36 year old point guard who was signed as an afterthought when Blake Ahearn and Pooh Jeter couldn't cut it.  Brian Cardinal is still in the league because Jerry West enjoys a bit of spite, and his contract is theoretically valuable in the 09/10 season. Madsen may be my least favorite player in the history of the NBA; a towel-waving millionaire who is "loved" because of his awkward sub-par play.  Who wouldn't hustle their ass off if they were given that much money to play so little? Not even overweight left-handed specialist relievers get that lucky.  He should be as popular and as valued as Oklahoma's punter.  Last night he made his first FG of the year.  The season is nearly 30 games old. He was inserted into the game before the #5 pick in last year's draft.  Say what you will about Love, but this is FUBAR'd whether you think he's going to be a bust or not.

Speaking of Mr. Love, my on-again/off-again love affair with J-Pete is off-again after he dropped the doozy of the year during last night's game.  While discussing Love's reduced minutes, J-Pete actually said that the team was doing Love a favor by not playing him so that his 'wittle feelers wouldn't get hurt by his poor play, and he could learn by watching from the bench.  Surprisingly, J-Pete didn't encourage potential ticket buyers to adopt a similar approach: staying at home until the team could actually field a competitive product.  Why one and not the other?  Note to J-Pete: this is a business and Love is an investment.  There is zero pressure to win this year and fans want to see him play.  No Madsen, no Cardinal.  Fans don't want to see Love become the 1st #5 pick in NBA history to hit 11th man status so quickly.  He's not a bust and he needs consistent minutes each and every single night.  25-28/night with plays run for him in the high post.  I'm not comparing the two players, but I encourage everyone to watch the recent Lakers/Celtics game and watch how Pau Gasol was used down the stretch.  He was set up in the high post and was a kick out option (as well as a driving/rebound threat) inside of the 3 point line.  Now watch how Love is used on the Wolves.  He sets screens on the wing and then posts up way the hell away from the bucket.  Kevin McHale was probably one of the greatest (if not the greatest) low post scorers in NBA history.  Kevin Love will never have that type of game.  He's a high post, Euro-style, facing the bucket big in the NBA.  No more post ups and get him some mid range jumpers from the free throw area.  From the outside looking in, it appears that they're right back where they were with Witt at the head of the bench vis-a-vis Love.

Well folks, that about does it for this wrap up.  Next up is the match-up the Love haters have been waiting for: Memphis.  The Wolves have a day off to prepare and they play at home.  Here is what we would like to see against Memphis:

I don't give a rat's ass about Mayo or how he does in this game.  The win is what matters here against a division opponent. The Wolves are better than a 5 win club and they need to start playing to their (admittedly weak) strengths.