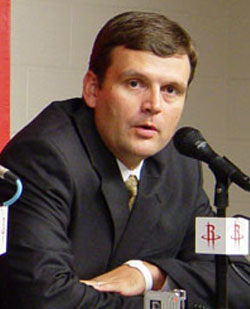 After a demoralizing loss like last night, there's no time like the present to continue the search for new leadership for this franchise.

Lindsey's name was most recently in the news after Billy Knight resigned from his position as the Hawks' GM. The Hawks reportedly pegged Lindsey as their man after Cleveland's Assistant GM Chris Grant turned down the job. Lindsey turned it down too.

Although he never explicitly stated so publicly, I can only imagine that Lindsey said "no thanks" to Atlanta due to their unstable ownership situation. Not to mention that the roster was pretty well set and a new GM would have a tough time building it with their own vision. (As an aside, how about those Hawks? I couldn't criticize King enough for his roster-building, but damned if he wasn't right in the end.)

Most of Lindsey's experience in NBA front offices came in Houston where he served as GM Carroll Dawson's go-to guy from 1997 until 2007, when Dawson resigned as GM. It was this summer of 2007 when the Rockets hired Darryl Morey as their new GM, essentially passing over Lindsey, whom many saw as the heir apparent.

In Houston, Lindsey has had not only spent a good amount of time making personnel decisions, he also has left a great record of some of the decisions. He kept a blog at the Rockets web site and posted articles on trading Shane Battier, scouting in Europe, and the Portsmouth Invitational Tournament. There's some good stuff from his current job too.

It's worth noting that Lindsey served in Houston with Wolves Assistant Coach Dean Cooper from '99 to '07. Cooper, in addition to coaching and scouting in Houston, spent some time there as VP of Player Personnel. If either one rises to a management position with the Wolves, I would imagine they'd get a hold of the other one pretty quickly.

While the Rockets have consistently sat in the contender circle for the last few years, they've never been able to grab that ring, largely due to the chronic injury problems posed by Tracy McGrady and Yao Ming.

But despite never grabbing a championship, the Rockets have put together contenders year after year under Dawson and Lindsey. The Wolves could do have done a lot worse.