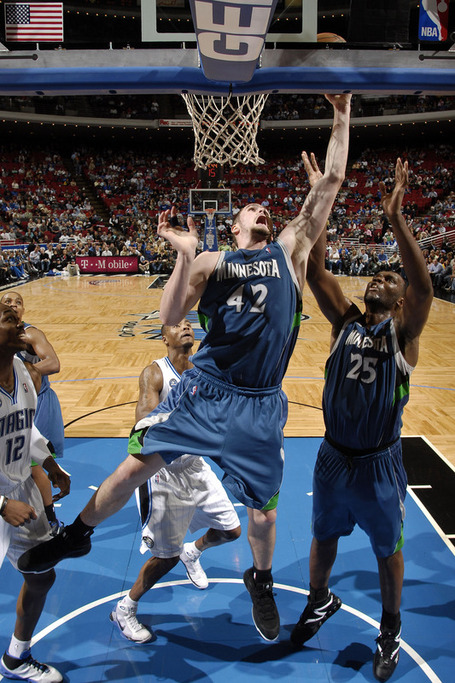 I can't remember exactly when it was in the game where Orlando figured out that they could run a player down the left side of the lane only to have a Minnesota wing player collapse in a slow-as-molasseses double team that would give the Magic a wide-open three point attempt from the wing.  I' m guessing it was somewhere near the middle of the 3rd quarter because all of a sudden the pinstripes started jacking up the three ball with frightening regularity (14 attempts in the 3rd and 4th).  They all occurred on basically the same play.  Magic player A would drive the lane or kick it to Rashard Lewis and Courtney Lee, J.J. Reddick, or Hedo Turkoglu would set up camp on the opposite wing and wait for the pass and the open shot.  Actually, I know exactly when they figured out the collapsing double team

…Orlando has figured out the collapsing double team.

I'm pretty sure it was mid way through the 3rd.  Anywho...

This was another embarrassing effort by Our Beloved Puppies Zombies. The good guys managed to take a grand total of 22 more shots than the Magic yet still ended up losing by 11.  One would think such a thing impossible, but the Wolves shot 41.4% from the field.  Actually, that's kind of misleading.  The Wolves were shooting 33% at the end of the 3rd before they made 14 of 21 shots in the 4th.

As if on cue, the Wolves once again lost a game because of that damn 4th 3rd quarter that Papa Glen is always complaining about.  If only the Wolves could solve that 3rd quarter problem....

At the end of the 2nd, the Wolves had attempted 49 shots from the field (17 more than the Magic).  They had out-rebounded the Magic by a grand total of (12-28) to (0-15).  Yet, thanks to free throws and poor shooting, they squandered a solid pace + a massive rebounding advantage.  The Wolves only scored 8 points on 12 1st half offensive rebounds and they ended up down by 6 at the half.

Here's where things get a bit sticky.  The Wolves clearly couldn't hit the broad side of a barn last night.  However, the only reason they were still in the game was because they took a lot of shots and crashed the boards.  The big question at the half was this: Would the Wolves slow down the pace in hopes that they would shoot better if they took more time in the half court or would they go with the flow and keep shooting 20+ shots/quarter and hope that the shots eventually start to fall against a superior team?

The 3rd quarter featured some especially brutal ball from our favorite team.  Not only could they only muster 17 shots, but Orlando out-scrapped them on the glass to the tune of 10-4.  That's right, the Wolves had 4 rebounds in an entire quarter.  This mostly had to do with Orlando shooting 67% from the floor during the quarter (to go along with 8 FTAs) but it also had to do with some absolutely baffling rotations on the part of the Wolves. With Miller out of the game due to a nasty rolled ankle, Randy Wittman, the coach of your favorite team, ran out Rashad McCants at the 3 (against the 6'10" Turkoglu), Ryan Gomes at the 4 (against the 6'10" Lewis), and Al Jefferson up against the massive Dwight Howard.  It doesn't take a rocket scientist to figure out what happened next: Orlando went on a 20-4 run against the slow footed Minnesota midgets.

Randy Wittman: turning his team's greatest strengths into weaknesses since 2006.

Of course, with things going poorly against the mini-lineup, the Wolves' fearless leader decided that it would be a good idea to put Jason Collins in for Big Al instead of, you know, addressing the McCants-at-the3/Gomes-at-the-4 issue or the pace.  The team continued to get torched with the offensive do-nothing Collins in the game instead of Al.  It took until just over 3 minutes left in the quarter for Witt to sub in Kevin Love for Mr. Gomes.  Of course, even this little good deed couldn't be executed without a hitch and  Love entered the game with Craig Smith and The Rhino was promptly eaten by Superman.  Seriously, he was eaten.

After seeing his small-ball/slow-paced team get torched to the tune of a -16 run, just how do you think Mr. Wittman ended the quarter?  With a lineup of Sebastian Telfair, Brian Cardinal, Shaddy, Smith, and Love.  I believe they were entered into the game by way of clown car.  I eagerly await word on whether or not the 3rd quarter conformed to any sort of "game plan" that Witt drew up at half time.

I'll say it until I'm blue in the face: there is nothing wrong with small ball if you accept the personnel you have and deal with it accordingly.  Zombies are zombies and you can't change them.  This team needs to be taking a ton of shots.  They rebound well and have several players not named Al who can really get up and down the court.  In the 1st, 2nd, and 4th quarters last night, the Wolves played watchable up-tempo basketball.  In the 3rd, they slowed it down and got annihilated.  I'm not saying it's as simple as pace, but when you have a team that is only shooting 35% from the field with a ton of rebounds, you don't make adjustments to minimize their attempts.  That's insane.  25 shots a quarter.  I don't care if they shoot 40% from the field, 25 shots a quarter.  That is your prescription for the day.

Getting back to the Mike Miller injury, the Orlando TV crew quickly cut away to a shot of Kevin McHale covering his face in prayer.  He looked like someone had kicked his dog.  You could almost see the "holy crap there goes the trade" thought bubble over his head.

Speaking of the Magic TV crew, one of the great things about League Pass is that you get to hear the dirt on your favorite squad from other teams in the league who only get to see the Wolves play 2 or 4 times a year.  It was pretty amazing just how quickly Orlando's announcers could see exactly what the Wolves had in any given player.  "Kevin Love is a pure pick and pop type of player." "Craig Smith can't jump." "Rashad McCants can put up points in a hurry but not much else." "Randy Foye can't go to his left."  You get the picture.  Someone sign these guys up in the Wolves' front office.

Speaking of Mr. Love, he made his last 5 FGs of the night and ended up with 16 points on 6-10 shooting with 12 rebounds (8 offensive), 1 block, 1 shot blocked, and an even ast/to ratio.  I know he just went through a bad stretch of ball, but I am firmly convinced that by the end of the year, Love will be the best two-way player on this squad and he may even be the best player.  It was really amazing to watch the guy work on the offensive glass against the massive Orlando front line.  Even though he was out-sized and out-muscled, he still managed to grab a bunch of rebounds and keep a bunch of loose balls alive.  In his last 5 games he is shooting 50% from the floor while only getting his shot blocked 3 times.  Including the game against Phoenix where he only saw 15:18 of court time, Love has posted the following points, rebounds, and shots blocked numbers over his last 5 games: (16-12-1), (10-8-0), (18-12-1), (9-5-1), (3-5-0).  He's doing this in 20 mpg.  Remember folks, Jason Collins is your starting center.

Saving the best for last, the tilt against Orlando was a momentous occasion for Wolves fans.  It marked the official end of the Randy Foye at point experiment.  Last night Mr. Foye was moved to the off guard in favor of NBA vet Kevin Ollie.  Meanwhile, down in Miami, starting Heat point guard Mario Chalmers is averaging 30 minutes, 4.5 apg, and 9 ppg.  He is also 7th in the league in steals with 2.1 per game.  He would have cost a 2nd round pick.  The Wolves will now likely have to spend either a full MLE or a top pick on a starting point guard....to say nothing of having to address the off guard spot when Foye ends up as the perfect 6th man.  Who could have thunk it?  They traded away Chalmers for Pooh Jeter, Blake Ahearn, Kevin Ollie and they picked up a 6th man off guard with a lottery pick in place of Brandon Roy.  Yet somehow, these same clowns will be in charge of 4 1st round picks and a boat full of free agent cash in the off-season.  At least they have a coach who is equal to the task at hand.

Well, that about does it for now.  Big Al had another down game that was highlighted by yet another "book" defense, the Magic shot a season-best 57% from the field, and Courtney Lee looked like he's going to be a player.

PS: Can you really believe that Kevin Ollie is your favorite team's starting point?  It's exciting, isn't it? They couldn't bring on Mario Chalmers with a frickin' 2nd round draft pick, but they have no problem deciding the Roy/Foye debate once and for all by switching the still undersized Foye over to the off-guard.  Stick. Eye. Poke.

PPS: Orlando was playing without their starting backcourt.

UPDATE: I forgot about the nasty stint at the end of the 2nd quarter.  Britt deals with it nicely:

As for Wittman, let's limit ourselves to one example. With the Wolves down by two, 32-34, this is what color commentator Jim Petersen said as he checked out the coach's latest 5-man unit. "Well, this is going to be interesting: 4:12 to go [until halftime] and here is a super-small lineup for Minnesota, Craig Smith [at center] and Ryan Gomes [at power forward]. We've seen this lineup on the floor before and it's not been good." A total of 3:32 later, Orlando's lead had been bumped to 8 via a 10-4 run before Wittman subbed in Calvin Booth for Smith with 40 seconds left in the period. It is difficult to watch substitutions you instinctively know aren't going to work get implemented...and then have them not work.

UPDATE ii:  I can't believe I missed it before, but Brian Cardinal nearly had an 8 trillion. He played 7:43 without recording a stat.

UPDATE iii: Thanks to Ben Q. Rock over at Third Quarter Collapse, we now have a Four Factors widget for you.