Share All sharing options for: Love v. Mayo is the new black 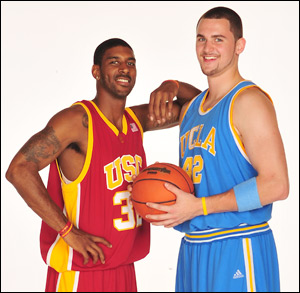 As you may have noticed in the outstanding Fan Shots PANIC and DON'T PANIC, we Wolves fans have taken a whole 17 games to devolve into Did We Get Screwed Again?: Roy/Foye the Sequel.  Has Kevin McHale Lucy once again pulled the football out from underneath our Charlie Brown's feet?  Or did the Wolves brain trust finally get it right; drafting the BPA and a guy that will give the team a solid effort for years to come?  Whatever it is, take a few minutes to check out the pros and cons in both posts and let us know what you think.

For what it's worth, below the fold are a few stats I will be keeping track of throughout the year on the two players.

Mayo is off to a fantastic shooting start and he's making his money with good shooting and solid scoring.  Love is getting to the line, not turning the ball over, and rebounding very well.

Granted, we're comparing apples and oranges, but what say you?

UPDATE: I should have made this clear in the initial post, but at the midway point in the season we'll weigh these stats against rookies at their positions as well as overall position rankings.  Some of these stats may be a bit misleading to simply say Love or Mayo is the winner.  For instance, OJ may have a very nice looking RebR for a rookie guard whereas Love may be simply average.  I didn't include it here because we're just 20 games into the season and I figure that some of the guys who got out to a super hot start would kind of throw things off.  I wanted to wait until these guys had more games under their belt than they did in college before I started weighing them against outside competition.

Also, some of these guys have either just been breaking into the swing of things (J.J. Hickson at the forward spot) or they have been under-utilized (see Love, Kevin...who is receiving fewer minutes per game than Jason Thompson).  That being said, since I'm a Kevin Love guy in the Love v Mayo debate, check out how he fares against Thompson, Michael Beasley, and Darrel Arthur.