The Glen and Kevin Show!!!

Share All sharing options for: The Glen and Kevin Show!!! 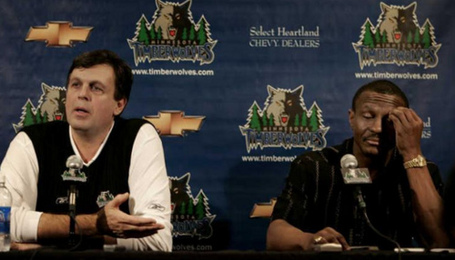 I've never been a fan of sequels.  They're so hard to do.  I'm more of an originals type of guy.  I first tuned into the G&K show way back in 2005 when it was spun off from Flip & Friends.  The above scene was taken from the original episode.  It features Kevin going on and on about things like accountability and the necessity of players playing hard, loving the game, and simply being basketball players rather than point guards and centers.

In part two sidekick Dwayne Casey was scrapped in favor of an obscure Flip & Friends irregular Randy Wittman.  He was introduced to the audience in much the same way Dwayne was in the original: the need for accountability, the necessity of playing hard, and so on and so forth.  Perhaps it was simply a case of writers block, but the series' audience didn't seem to be all that enthused with a new version of the same old same old, sooooooo....

This season, we are now faced with yet another episode of Glen & Kevin introducing a new actor into...well, being that the script hasn't really changed, Glen has simply inserted Kevin into the role of the guy that will bring accountability, playing hard, players loving the game, and all of that jazz.  Lucky him.

Before we continue, let's take a trip back in time to some of the famous lines from the Glen & Kevin show:

"Through this trade, we've become a much more athletic team," Timberwolves vice president of basketball operations Kevin McHale said in a statement. "With Ricky Davis, we've added one of the more talented shooting guards in the NBA -- both on the offensive and defensive ends of the court. Plus, with Davis and Trenton Hassell together on the court, we'll have a great defensive presence at the 2-3 positions."

Randy has proven himself to be an outstanding NBA coach and we feel he will be an excellent addition to Dwane's staff," McHale said. "He has a great knowledge of the game and a tireless work ethic."

'We believe that Randy Wittman will provide out team with a different voice to get us jump-started and going in the right direction,' said McHale. 'Randy is a known quantity who has a great amount of experience in the NBA. He's been an assistant coach, a player and a head coach in the league.'

"We were at a point as a team where we were just treading water," McHale said. "The ups and downs, we just couldn't find any consistency."

"We have to try to put together a product on the floor that's a lot more competitive and a lot more pleasing to watch," McHale said. "I mean there were times out there where I thought we were very hard to watch. You'd be watching the game and I'd be like, 'Ugh. That's bad."'

"I don't want to walk away with the team in this state," said McHale, who said this year's team resembled the "dysfunctional" squad he inherited when he was named vice president in 1995.

"Randy has a commanding presence in our locker room and we believe he is the best man to lead the Minnesota Timberwolves," vice president of basketball operations Kevin McHale said. "We have the utmost confidence in Randy as a leader and have no doubt that he will return the organization to the prominence we had a couple of seasons ago."

From the moment McHale named Wittman to succeed Casey, he made it clear that he wanted Wittman around for the long term. Despite the failures last season, McHale likes Wittman's "commanding presence in our locker room" and no-nonsense attitude.

"He's the type of coach that is going to demand an effort," McHale said. "He's going to push the players and yet he's flexible enough that they'll enjoy playing for him."

Problems started in January when McHale fired coach Dwane Casey with the Timberwolves at 20-20. Wittman took over in a move that McHale hoped would jumpstart the lethargic team, but the Wolves went 12-30 with the taskmaster at the helm.

So here we are with a brand new episode that is shaping up exactly like the two that came before it.  Glen and Kevin have run out of actors that are willing to step into the role of the accountability-bringer so they have simply written Kevin into the lowly part of coach.

Stepping outside of the nonsense for the rest of the post, yesterday's joke of a press conference was even more insulting to fans than the one where Glen & Kev told the world that the coach of a lottery-bound .500 ball club was the reason for all of the "dysfunction".  These two clowns actually had the nerve to trot out the same old lines that were used against Flip and Dwayne to justify yet another coaching move for their broken franchise as if fans couldn't remember all the way back to last month:

"If I worried about the short term, and I looked at the economy and all my companies, if I based things on that, then I'd fire all my presidents because they had a bad month," Taylor said. "I've been through ups and downs. You've got to be patient. I think Randy has prepared (the players) well. We've just got to get them some confidence. They're still young."

That was on November 20th.  On December 8th Papa Glen was telling his fans that his business acumen was part of the decision making process in deciding to fire Randy Wittman.  This sort of two-faced approach is par for the course with Glen and Kev.  It was last year at this time that the Iron Ranger was telling fans that he couldn't wait to see what a shot blocker like Theo Ratliff would do next to Big Al Jefferson.  Upon Theo finally being able to play, he was bought out and sent packing.  So much for the shot blocker experiment.  But remember folks, there's a blueprint.

One of the most notable things about yesterday's presser was how Glen & Kev talked about their relationship; as if it were a beautiful thing built around an unspoken trust in one another.  What they didn't talk about was their responsibility to the dwindling number of fans who have heard this song and dance before.  "I'm a results type of guy," Glen said in response to a question about what he told the players when he informed them of the coaching change.  Really?

The most insulting part of the all-around insulting display of boobery at Target Center yesterday was the insistence that this team wasn't meeting the sorts of goals that it set out at the beginning of the year.  What sorts of goals are we talking about?  Well, certain "steps" weren't being taken, said Papa Glen.  What steps, you ask?  "They're not all measured in wins and losses," says PG.  Well, what are they measured in?  We just want to see improvement, say Glen & Kev.  How do you measure that improvement?  By meeting the goals we set, say the dynamic duo.  And the circle is complete.  Maybe some lines from episode two can shed some light on this mess:

"We started the season with certain goals and expectation that have not been met."

Ah, of course. And so begins yet another season exactly like the ones before it.  The only hope for Wolves fans is that the Iron Ranger has now been placed in the one and only position that guarantees expulsion from the Country Club: coach; and that the Glen & Kev Whomever show will henceforth be produced by someone not named Jim, Rob, or Fred.