Game Thread: Owners are Zombies Too

Share All sharing options for: Game Thread: Owners are Zombies Too 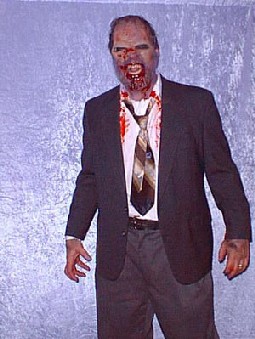 Folks, it's been a negative few days/weeks for our Beloved Puppies Zombies. The team went from a 104.3 OE (18th), 108.4 DE (26th), and a -3.9 point differential after 10 games to a 102.4 OE (24th), 109.5 DE (25th), and a -6.2 point differential after 19. They lost Corey Brewer to a season-ending knee injury, Mike Miller to a nasty ankle turn, Randy Wittman to gross incompetence, and Kevin Love's minutes to Jason Collins. This negativity has spilled over into Hoopus' coverage of the hometown five. After years and years of being beaten down by draft nonsense, non-stop crass marketing, bargaining a hard line in all the wrong places, and other assorted forms of 600 First Avenue boobery, it was hard to view yesterday's coaching change as anything other than more of the same. However...
Since the very beginning of the season I have said that this squad is built to be a small-ball, up-tempo team that shoots a lot of threes, grabs a lot of rebounds, and runs up and down the court. They are who they are. They are zombies...in the best possible sense of the word. The mistake I've made with this franchise is failing to recognize that the front office is who they are (if that passes grammatical muster). They are zombies too...although, not quite in as good of a way as the players. They are businessmen to the core and no matter what decision they make, it will always be pitched to me, the fan, as a magical part of the ever-unfolding blueprint. Britt had it exactly right in his response to a comment I made over at his place:

In short, things have suddenly gotten a lot more interesting around here, and in a good way. Demanding the pound of flesh that will never be exacted is a self-destructive attitude. You yourself have argued that this roster is more intriguing than it has performed thus far this season. Well, McHale agrees with you--and absolutely needs to demonstrate that it is so. Those who wanted Wittman out as coach and McHale out as the guiding force behind the franchise have pretty much had their wishes granted. Savor such small rewards and consider that tonight's game is the beginning of a new phase.

To mangle an old adage, even blind squirrel zombies find squirrel brains every once and a while and this recent move does indeed represent something of a new beginning. It may even bring about some positive changes. They are who they are and I should act accordingly. Our readers know exactly how we feel about the front office and there's no sense in going on and on about it...especially when the negativity becomes a tad overwhelming.

Soooooo...here's hoping for some up-tempo zombie ball. Here's hoping that McHale is the business as coach. Tonight's game against the Jazz should feature the squad's biggest effort of the year and with D-Will in town, we'll also get to see one of the best players in the league. This week will also feature our After 20 post as well as the first Canis Draft Board post since the start of the season. Enjoy the game and try not to think about the bad zombies.

PS: It's also Jerry Sloan's 20th anniversary as head coach of the Jazz. You can get your Utah fix at our sister site SLC Dunk.