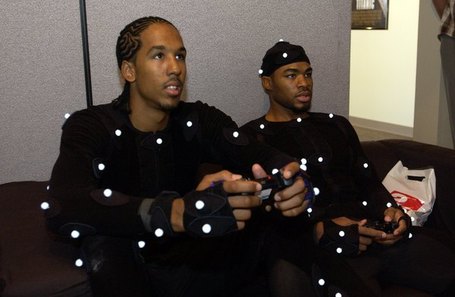 First Portland passes and now this (highlights are mine):

Riley said the Heat payroll, as it stands now, is only $415,000 under the luxury tax threshold.

Still, he acknowledged having interest in free agent Shaun Livingston, the former Los Angeles Clippers guard who hasn't played since a massive left knee injury in a game on Feb. 26, 2007.

"There's a big question mark with the kind of injury that he had and whether or not he's going to be able to come all the way back," Riley said. "It's a risk, but it's a big upside risk."

Livingston's agent, Henry Thomas, said his client wants to be with a team by the start of camp.

The Heat are opening camp a few days ahead of most NBA teams because they will be playing two preseason games in Europe next month.

I don't know about you, but I find it hard to believe that a 15 win team--even one with D-Wade, Marion and Beasley--would go over the lux mark for a 15th man.

As of now, the Wolves are the one team remaining on Livingston's list that can actually pay him decent money without taking a lux tax hit, as they are about $3 mil under the upper cap mark.

There is literally no down-side in doing this.  I know that Collins is out and that the team would like frontcourt help early in the season, but the Wolves absolutely need to take the long-view approach here: they are not going to contend in a meaningful way this year and they could have up to 4 1st rounders in next year's draft (to go along with the possibility of Pekovic coming over in 2 years).  If Livingston works out, they fall backwards into a big bowl of luck with a young PG.  If he doesn't, they still have boatloads of young talent coming into the system in the next 2 years.