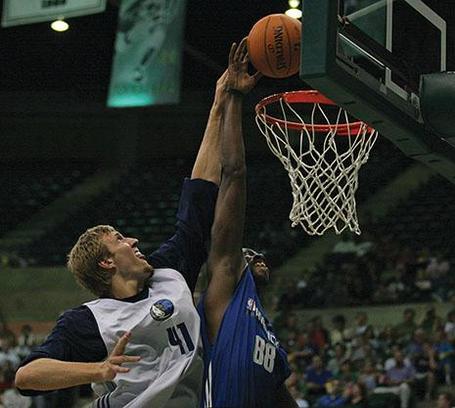 Yes, that is who you think it is.

Jerry Zgoda has a blog post and a story about some roster goings-on as we approach the start of training camp (Sep. 30 - Oct. 4 at Mankato State):

[Blake] Ahearn ... is a candidate to earn a job as a third point guard ... The Wolves also likely will sign another guard to their training-camp roster by Monday.

He also mentions Rafael Araujo is going to be in camp. Do not be fooled. Unless he is a different Rafael Araujo than the 2004 lottery pick, he's not good. I would bet the only reason Araujo's getting the big man invite is because he knows Wolves Assistant General Manager Rob Babcock (Babcock is the GM that used the #8 pick in 2004 on Hoffa). Seriously, go look at that 2004 draft list and tell me why Babcock would want to open the door to reminders of that draft pick.

But back to the point at hand. By my count, the Wolves have 14 players under contract. If Richard signs his qualifying offer, it becomes a one-year contract and that would make 15. Then they're bringing in Ahearn, Araujo, maybe Livingston and another guard?

If one of Ahearn, Livingston or another guard is brought on as the third point guard (which would be advisable given the injury histories of Foye and Telfair), that would make the roster 16.

See what I'm getting at? If Richard (who seems to have handled the team stringing him along all summer very well) and another guard are signed, someone's gotta go. If I were a betting man I'd say Calvin Booth would be the one to go.

But, fear not Wolves fans, all this training camp talk means the season is nearly upon us.