Will rebound for food

Share All sharing options for: Will rebound for food 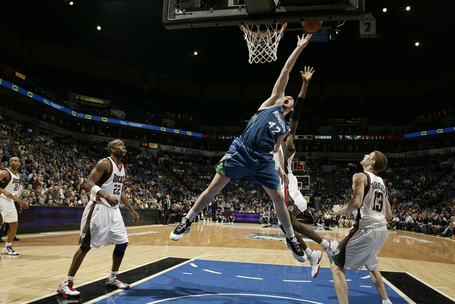 First of all, last night was the first time this year where League Pass came in handy.  With the game not being shown on FSN North or Channel 45 I was able to pick up an archived replay after getting home from watching Winona State defeat Minnesota State in front of a big (3,500+) crowd at the Glen Taylor funded Bresnan Center.  With states like Iowa and Wisconsin having more than 1 D-1 program it should be every Minny baller's wish that Winona State makes the leap in the next 10 years.   I'm not a big fan of college ball on TV, but in person and in front of a playoff-like crowd, it's the bee's knees.  Anywho, on to the big boys.

Last night's tilt put the Wolves' winning streak at 5 games, their first five-gamer since December 12, 2005.  Let me repeat that: this is the first time they have won five in a row since 2005.  Two thousand and frickin' five.

Last night's tilt was also the first game in the streak against what can be considered a solid opponent.  Much has been made of the Wolves beating subpar competition and they have done what we hoped they would do at the beginning of the year (beat up on the crap) but the victory against the Bucks represented something of an additional milestone.  Four quarters of actual basketball are now being played at the Target Center.  Can you believe it? When was the last time the Wolves played like this?  When was the last time you could go to the Target Center and watch an opposing team play hard for 4 quarters and still lose?  When was the last time that sort of try-hard opponent was halfway decent?  Once again, I think you need to go back to the days of pre-Witt KG to find play this good from everybody's favorite team of zombies.

Speaking of zombie ball, this team has been a sight to behold of late and they are doing it with offense, situational defense, and superior rebounding.  Your Minnesota Timberwolves now sport the league's 23rd best offense (104.6) and defense (109.2).  Since Christmas (the birth of this current streak of zombie-based play) the Wolves have scored above 100 points in 7 out of 9 contests.  They have gone over 120 twice.  In their current 5 game streak they are averaging 109.2 ppg.   They are shooting .461 from the field and .398 from beyond the arc.  Best of all, they are murdering opponents on the offensive glass, pulling down over 15 Oreb/game and holding their opponents to a far lesser rate.

Last night against the Bucks were outrebounded on the offensive glass 11-6.  In just over 22 minutes of play Kevin Love accounted for 12 rebounds.  I have been saying it all year long: collecting their own misses and limiting opponents from collecting their own is the number one way a crappy defensive team can even things out against superior opponents.  Basketball is a game of net possessions and rebounding is a fantastic equalizer for a certain poor-shooting, questionable-defending team of zombies.

Let's wrap this up with some bullet points:

Wrapping things up, midway through the 3rd quarter Al Jefferson appeared to be well on his way to having one of his haywired offensive performances that we have talked about on this site numerous times.  He was forcing up nonsensical shots into triple coverage while guys like Miller, Foye, Carney and Ryan Gomes were standing open beyond the arc.  It was brutal.  The offense literally came to a grinding halt.  Thankfully, assistant coach Jerry Sichting pulled a McHale, called a TO, and got the offense back in motion.  When Big Al fouled out late in the 4th, Love came in (and played solid d on Bogut BTW; much better than what Al offered) and Al cheered from the bench.  We talk a lot on this site about his scowls and his all-too-out-in-the-open propensity to yell at his fellow players, but Al was the first guy off the bench to celebrate after the final buzzer sounded.  He went right to Love.  Perhaps the scowls had a bit to do with a certain former coach.  Speaking of whom, the thinly veiled under-the-bus throwing has begun:

Somebody told McHale after practice one day that he doesn't seem much like a coach on the sidelines because he doesn't yell at his players.

"I would never do it," he told reporters. "I don't think that's how you do it. If you have something to say to people, if we have things to say to each other, we say it face to face, man to man and you guys never hear about it. That's the way it should be."