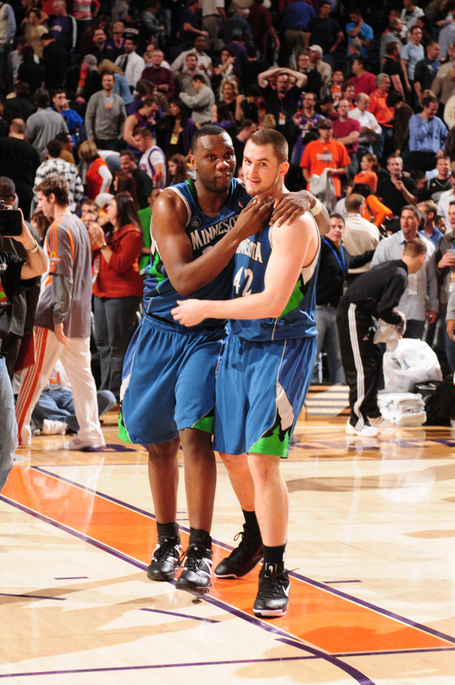 We really need to start coming up with a good nickname for this front court duo.  Hell, we need a good nickname for Kevin Love, because K-Love just isn't going to cut it in the long run.  That being said, and before we start figuring things out, it's time for a victory dance:

BTW: while Googling "thriller dance" I came across this website.  Who knew that there was a group seeking to organize an annual worldwide simultaneous zombie Thriller dance?  Who knew that on October 25th, 2008 a record 4,179 people from around the world participated in a Thrill the World event?  Did you know that there is a "learn the zombie dance" script? Here's a taste:

Wolves dancers, let's get on this ASAP.  Sigourney, Ashley, Chrissa, Lexi...make this happen.  BTW: we have lots of new readers and you can read about the origins of winning zombie ball here.

Anywho, speaking of obscure information, I watched the game on League Pass last night and was treated to the surprisingly solid Eddie Johnson as a color commentator.  Eddie spent his college career at Illinois (playing against Jerry Sichting's Purdue squad, no less) and he had an interesting story about knowing Brian Cardinal from his childhood.  Sure enough, Cardinal grew up in orange and blue:

Growing up in Tolono, Ill., Cardinal could afford to play with such reckless abandon. His father, Rod, has been the head basketball trainer for the University of Illinois for 24 years. Cardinal believed he'd one day play for the Illini, getting taped up and iced down by his dad. He was a ball boy on the 1989 Illinois team that went to the Final Four and he learned to shoot a basketball at Assembly Hall.

The Suns broadcast also featured a 1/2 segment with Tom Chambers, he of dunking-over-Marc-Jackson fame. Getting around to the game...

Who here remembers what Love told Al Jefferson before the start of the season?  "You're going to love playing with me."   For a while there, the confidence found in this statement was lost to missed bunnies, short rotations, massive defensive issues, and all-around rookie blunders. During the recent win streak, the confidence which allowed a rookie who had never played a minute in the league to say this to his new team's best player is clearly back in full force.  In his last 10 games he is averaging 9.7 points and 9.2 rebounds (3 Oreb) in less than 22 minutes of action per contest.  He now has the 2nd highest rookie PER and his team finally has more wins than Memphis.  On the other hand, O.J. Mayo's last 10 have seen him log an insane 39.9 mpg while shooting .412 from the field (.316 from 3) while scoring 17.8 ppg with very little else.  There was no way he was going to maintain his early-season run.  He simply couldn't maintain his 3p% and his mid-range jumper %, and he can't make up for their downturn because he doesn't get to the line, limit his turnovers, or get a lot of assists and rebounds.  He is still a fantastic rookie.  This is not me crowing about the deal.  This is perspective.  Mayo is a scorer.  He will likely always be a better scorer than Love.  However, I think there is a good chance that he will not always be a better player than #42.

Last night Love put up 13 points and 14 rebounds in 26 minutes.  What the stat sheet doesn't show is that he impacted the game in just about every way imaginable.  The guy is a possession extending/generating machine.  Aside from the 7 Oreb and 2 steals, Love frequently hit Sebastian Telfair in stride on a 1/2 court outlet pass (it's not just the bombs that are important), he got under Matt Barnes' skin drawing a technical and free throws for a shot, he baited Amare Stoudemire into a foul with the anchor rebound trick, he played solid defense on the Big Cactus down the stretch, and he got his hands on several loose balls that were either batted away from opponents or to teammates.  The guy is simply a blast to watch and he is already showing signs of being the type of upper-level glue guy that can fill in all the gaps so that guys like Big Al and Randy Foye can go about doing what they do best.  The guy is like a basketball version of Joe Mauer and Nick Punto (on a good year) wrapped into one.  It is beyond baffling that the Wolves marketing department hasn't rolled out a Love-specific ad campaign.  The guy does all of the cliched little things that Minnesota sports fans can't seem to get enough of.  Here's my suggestion for a nickname: The Big Piranha. (For fans who don't know about the Twinkies and little piranhas, click here.)

This post is getting kind of long but there are two more things that I'd like to point out.  First, Randy Foye is becoming the type of player opposing teams will have to game plan for in the 4th quarter.  I know it seems like a gimmick and it hasn't been true until this post-Xmas stretch, but the 4th Quarter Foye stuff is looking more and more like a pattern and less and less like a fluke.  The guy daggered the Suns last night putting the Wolves ahead for good with a cold hearted jumper.  As a fan watching the game, if the tilt is on the line I want the ball in his hands.  Al and Love can punish the opponents down low for 3 1/2 quarters; Bassy and Rodney Carney can run up and down all the want for 40 minutes; and Cardinal and Ryan Gomes can provide all the gritty forward action they can until the game gets down to the last few possessions.  When this happens, they need to get the ball the hell to Foye.

Second, I'd like to point out something from our excellent sister site Beyond the Sun:

Matt: I should have listened to my gut

Phx Stan: Yes Matt. You were right. I was wrong. Suns got in at 4am. OT last night and Nash was dead tired and Amare is getting worse. Rebounds might as well have been bouncing off his head for all the effort his gave

And that folks is all the recap you are going to get out of me for this game.

Most of the times you kill the Wolves. Sometimes if you aren't careful and you are lazy and you think the world should vote for you and you disrespect him and don't have the right amount of fear for him The Wolf eats you.

I think teams are still sleeping on the Wolves.  All teams have late nights.  All teams have tough travel schedules.  Minnesota came out and hit Phoenix in the mouth.  Amare didn't get the rebounds because he ran into the best rebounding duo in the league. I think it has to be something of a surprise for veteran winning teams (and opposing fans) to see what the Wolves are putting out on the floor these days.  It has nothing to do with schedules or being tired.  The Wolves are no longer a team that opponents can toy with for 3 quarters before pulling away late in the 4th.  They hustle and play up tempo.  They are getting solid guard play.  They have a low post beast. They have a guy who can play down the stretch on the perimeter.  They have the Big Piranha.  They are finally playing to their strengths and they are what they are.  They are now the 20th ranked team in Hollinger's team rankings while their point differential is back above -4 ppg (which is quite an accomplishment after Randy Wittman).  They have a higher ranked defense than the Suns and they are playing with just as much offensive efficiency as Phoenix is during their recent stretch of good play.

There is no shame in succumbing to the zombie horde. These aren't your Witt-led puppies.

For more on the game from a Phoenix perspective, check out Bright Side of the Sun and Ben's Suns Blog.

BTW: I want to highlight an excellent point about the Heat game from Greek House over at the always-excellent WGOM:

One play that was particularly frustrating to me as a fan came in the first half. On the previous Heat possession, the refs had made a rather dubious foul call for Wade. Then, Carney reached in and cleanly stole the ball and the refs blew the whistle as if to call a foul. They then got together, realizing that they had called a bogus foul for the second consecutive possession, and eventually decided to call a jump ball. You would think they would have given it to the Wolves, but that's not what upset me. What upset me was that the whistle indicated to me that the refs were basically looking to give calls to Wade. I'm not sure how as a player you could even guard him after this, since you know that any sort of aggressive defense will likely earn you a foul call. To the refs' credit, they seemed to do a better job after this, although it did seem like he was able to get away with traveling quite a bit.

Well put.  D-Wade is a fantastic, fantastic player who is a blast to watch, but there's always that nagging feeling that he's doing it with significant assistance from the zebras.  Wade made more free throws than the Wolves attempted and there were plenty of no-calls that...well, it's frustrating to watch how the refs try and "balance" games and it kind of sucks that fans are left hoping that their team can get a player who gets the benefit of the doubt rather than simply hoping for an evenly called game.

UPDATE: I had a Suns fan email me to ask about the claim that Minnesota is playing as good or better offense than the Suns of late.  Here's where I got the info from:

While Minnesota improved on both ends over the nine-game stretch, its progress was most apparent at the offensive end. The Timberwolves rank only 24th in the league in Offensive Rating for the season, at 105.4 points per 100 possessions, but that number has increased to 114.3 of late -- about as well as the league's best offenses have scored over the course of the season.