The ups and downs of McHale ball

Share All sharing options for: The ups and downs of McHale ball 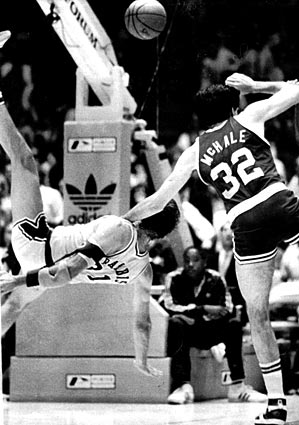 First of all, I'd be lying to you if I said that I wasn't happy with the way the Wolves are playing since Christmas.  After flirting with the very bottom of the NBA under Randy Wittman, the McHale-led Wolves have clawed their way up to being the 22nd ranked team in offensive and defensive efficiency.  Over their last stretch of 12 games, they are scoring over 110 points per 100 possessions.  This is upper-level offensive territory and it out paces their 109.2 points given up per 100 possessions.

This recent burst of good play has been mostly attributed to a few key factors: moving Randy Foye off the ball, improved perimeter shooting, the emergence of Kevin Love,  solid bench play from Rodney Carney and Brian Cardinal, and the loosey-goosey coaching style of the Iron Ranger.  Confidence is hard to quantify but since McHale took over at the end of the bench, these guys seem to have it in spades.

As fun as they have been to watch, it hasn't all been pretty in Wolves-land.  The wins against Phoenix and Milwaukee represent the only wins against quality opponents;  The 29 point Disaster in Dallas/Casey's Revenge still burns the memory; and, most of all, there are still qualities this team possesses that seem both fatally flawed and uniquely McHale.

One of the cruelest ironies of the team's current success is that is was built on the back of sacrificing one man (Wittman) for another man's sins (McHale).  No matter how he may be cooking the ingredients he himself shopped for, McHale brought Randy Wittman in to bring Bobby Knight discipline to a young team.  He presumably knew exactly what type of coach Wittman was, otherwise he would not offered him the job.  Remember, just as much as we talk about how the Wolves' players are a bunch of offensively-minded zombies whose nature cannot be changed, Witt is an even more glaring example of nature over nurture and one really has to question not whether or not his personal failure led to the horrible start, but what sort of sick bastard put the two male beta fish in the tank together?

Having seen that his Boston Celtics Fantasy Camp guide had already failed Chemistry 101 on numerous occasions during his front office career, Papa Glen banished McHale to the end of the bench so that he could clean up the mismatched Bobby Knight and zombie stench that was burnt into the floor of the Target Center.

Throughout his entire career as a player, announcer, and front office personnel, Kevin McHale has always struck me as a guy who, while tremendously smart about his craft, was limited by the fact that his excellent game was fundamentally specific and did not represent a wide spectrum of what actually made for winning basketball. He was a low post specialist.  He is a guy who has drafted more on perceived character traits (ones that he values) than college stats (a more exportable and consistent barometer of performance). He is a guy who seems to be tone deaf to the point of prickishness when it comes to dealing with people outside his box.  Admittedly, I'm projecting here, but I like to think my psychological analysis is on par with what passed for player evaluation under the front office administration of the man from up north.  He didn't need to talk to Roy Williams to know that Rashad McCants was his guy so what is the point of me actually talking to him in order to...anywho, my point here is that McHale seems to have a particular set of personality traits that have followed him from his time as a player to his time as an announcer to his time in the front office to his time on the bench.  Last night the Wolves put on a display of the very best and worst of what McHale has to offer.

First off, even after a nice game against his hometown Clippers, Craig Smith should not have been allowed within 10 feet of Mehmet Okur.  It, of course, was fitting that once let onto the court, Smith was not able to stay within 10 feet of the big fella.   Utah started out the game with a big ol' gang tackle on Al Jefferson.  It was obvious what was happening. They were collapsing in and forcing Minnesota to go over the top. For all of McHale's talk about exploiting mismatches, he seems to be completely tone deaf to situations where his own team is on the wrong end of the matchup stick.

After the 12-0 run to start the game one would think that some sort of adjustment or change would be in order.  However, adhering to the loosey-goosey style of letting his players play in games and letting coaches coach in practice, McHale sent the starters right back out for more, and while they held serve until the reserves were able to come in, spread the floor, and force away Utah defenders from under the bucket, I suppose the approach worked for the balance of the game...if you simply choose to ignore the horrible things that happened at the beginning.  Since yesterday was a day of new beginnings, let's grant McHale the imaginary George W. Bush benefit of the doubt: he may have been hammered early, and ultimately he lost the game, but he kept things even through the final 40 minutes of the game and I suppose he deserves a pat on the head for that, even if his approach did nothing to address the actual problem.

The other notable McHaleism that happened last night was after a 3/4 court pass sailed over the head of an apparently sleep walking Jefferson for an easy layup.  Had Wittman been at the end of the bench for such a shocking display of inattentiveness, Jefferson would have known to walk directly over to the last chair on the bench and hang his head in shame.  Under McHale, nothing.  Well, nothing in terms of on-the-court action.  I'm sure that the issue will be taken up in practice but one is still left to wonder if there are any lines to be crossed with McHale ball?  Where is the in-game quality control for amazing blunders that are simply unacceptable from your star player?  Let's imagine that the Wolves eventually find themselves in a high-leverage situation with a playoff spot on the line and McHale at the end of the bench.  Are these games still just time for the players?  Or does McHale need to take a lesson from a guy like Greg Popovich and realize that even though players control 95% of the game, the 5% that coaches have sway over come at times that really, really matter and it's a scary thought that McHale has shown nothing to assure fans (or anyone else) that his delegation-happy approach will ever see the buck end at his desk.  The man made a front office career out of cashing his checks out of other mens' hides.  He may be the team's  "decider" but that's probably just another name for an uncurious lack of oversight by a man locked into his ways.

Eventually, the Wolves will find themselves in a situation where things matter.  Just like he was in the front office, McHale is good and smart enough to put a few key pieces and ideas in place but he's also limited enough to have tunnel vision with the mismatched pieces and ideas that will take the whole damn thing off the tracks.

Let's end this thing with some bullet points:

Well that about does it for today.  Until later.