Ladies and Gents, the winner of the Shaddy/Foye Death Match!!!

Share All sharing options for: Ladies and Gents, the winner of the Shaddy/Foye Death Match!!! 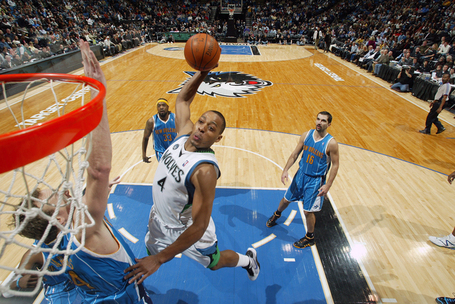 OK, OK, I know that Foye was blocked on this dunk attempt, but the photo is too good to pass up.

Last night's game against the Hornets was almost like a contest against the Super Clippers.  Do you remember when OBZs went out to LA and barely beat a scrappy squad without Baron Davis, Marcus Camby, and Chris Kaman?  The Hornets showed up to the Target Center without an active Tyson Chandler, Hilton Armstrong, and David West.  They were the Super Clips because Chris Paul > Eric Gordon and they shot the lights out from beyond the arc while the Clips couldn't hit the broad side of a barn.

Because their opponent was missing a fair chunk of its regular rotation, it wasn't one of those games you can point to as a "holy crap" moment against an upper-level NBA squad.  However, they still did what they had to do and that by itself is a significant departure from what we Zombie fans have had to deal with for the past...oh, 4-5 years.

It almost wasn't the case.  Perhaps knowing that they were short handed (especially in the front court) against an up-and-coming team on the road, the Hornets seemed perfectly content with going over the top of the Wolves defense; going 13-22 from beyond the arc and running up an impressive collection of long shots from just inside the line.

The problem early on was that Sean Marks was actually making shots and that the Hornets came out of the gate with a 70% eFG in the 1st quarter.  At the half, NOLA still posted a 62% eFG.  Out of the 17 total shots they missed from the field in the 1st 1/2, only 3 were collected by the Hornets while the rest went out of bounds or were rebounded by the Wolves.  NOLA also went to the line 7 times while drawing only 4 fouls in the first 24 minutes of action.  Quite simply, the Hornets didn't seem like they wanted to get their hands dirty and they seemed perfectly comfortable taking long shots, not fighting for rebounds, and avoiding mucking it up with Minny's considerable muckers.

Despite being 8-2 in January I still think fans are sleeping on what the Wolves have going on up here in the frozen tundra.  At the 20 game mark (1 game after the end of Randy Wittman ball) the Wolves featured the league's 25th ranked offense with 102.8 points/100 possessions.  A little over a month later, they now feature an offense that is putting up OE numbers between 112-116/game.  Their season average, even after all the Witt-ball, is 106.2/100 possessions.  They're outscoring opponents by 7.8 ppg in January.  They're shooting significantly better, collecting a hefty chunk of their own misses while limiting their opponents from collecting theirs, and allowing their opponents to take fewer free throws.  For opposing fans and teams, the Wolves you saw in December are no longer the folks you once knew and could depend on to roll over with only 1 quarter of effort required.  Take a look at the game preview from Hornets 24/7:

PG: Sebastian Telfair v Chris Paul
Advantage: Hornets
If you can get past Telfair's 34% shooting, 1.02 points per shot, 2 rebounds per game, and pretty poor assist to turnover ratio en route to 4 assists per game - you have a pretty good player - who can't rebound, shoot, pass or . . who am I kidding?  Have fun with Paul, Telfair.

SG: Randy Foye v Rasual Butler
Advantage: Even
After years of being injured or played out of position at point guard, Foye is finally being used at his natural shooting guard spot.  His shooting percentages have climbed as a result, and in January he's cranking it at 50% from the floor for twenty points per game.  He is becoming, essentially, Ben Gordon of the Bulls.  Rasual's offense is as good, but I give him the edge on defense, evening this bracket.

While the author is clear that the Wolves must be taken seriously because they are playing better of late, he still sees the Wolves' starting back court with Witt-colored glasses.  We all know that Sebastian Telfair is no Chris Paul but the player described above is just as foreign to us Bassy fans as is someone with the game of Mr. Paul.  Back at the 20 game mark, SeBass was averaging 14 FT/FG with a 4.1 PPR and a 31.5 ast-r.  Since the advent of Kevin McHale ball he has cut down the outside shots, increased his PER by nearly 2 points, increased his trips to the line to 24 FT/FG while retaining more than adequate PPR and ast-r numbers.  He's an amazingly quick guard who isn't that bad of a defender and who has done the Wolves a world of good by being able to control the tempo and keep things brisk.  Does he need to shoot better? Of course.  Does he not grab a lot of rebounds? Sure. But he has considerably more worth than what the rest of the league and its fans may realize.

I don't point these things out to pick on the excellent blogger over at Hornets 24/7.  I point them out to show how even though the Wolves are playing solid, confident ball and are 8-2 this month with across-the-board improvement, most fans and teams still seem to have an outdated view of what this club is bringing to the table on a night-in/night-out basis.  Bassy is not a do-nothing push-over.  Foye is...well, Ben Gordon with a bit more juice on situational defense (and a better handle) is much closer than Rasul Butler.  Again, I'm not picking on anyone here; just pointing out that the Wolves...well, OK, I am picking on the Butler/Foye draw.  Foye went for 24/5/8 with a +13 and no turnovers against Butler's 12/3/1 with a -15 and no turnovers.  Foye is morphing into a poor-man's D-Wade (which was literally unthinkable earlier this year; it shocks even me; especially after watching the Wolves back court perform at historically awful levels early on) while Butler is Butler.

Getting back around to last night's tilt, it was a pretty good example of the Mike Miller "problem".  On one hand the guy is in the middle of an epic cold spell.  On the other hand, he really is pulling his weight on the boards while being the only other guy on the roster outside of Bassy and Foye who can be a play maker off the dribble.  In fact, he's probably a better play maker than Foye.  Last night Miller held his own off the bench with 9 rebounds, 5 assists and 12 points.  He was 0-2 from 3 but he got his points by getting into the lane and creating havoc.  For us fans, the big question about Miller and the Wolves is this: What if he gets his stroke back?  What if the Wolves trot out Big Al Jefferson's nightly double-double down low, Randy Foye's dribble drive game with its lethal long range capability, and Miller's marksman shooting?  If they're performing at an upper offensive level without Miller's outside shooting, what happens if and when the bombs start falling?  With a team that has averaged a 114 OE in January, the immediate response to such a scenario is "holy crap".   3 capable offensive threats with guys like Kevin Love, Craig Smith, Ryan Gomes, Rodney Carney, and Bassy filling in the gaps....that sounds like the makings of something.  And so goes the big question: Does the team wait on Miller or do they move him for an expiring deal and (hopefully) a younger player/pick?

As you can see in the Mike Miller Trade Watch FanPost, this is the hot issue with the squad right now.  My 2 cents on the matter are that Miller's performance and value are two separate subjects.  He could be performing at his career averages and that wouldn't change the amount of cap space he could move off the books should he be traded.  The trade talk should be in the context of what his trading could bring to the table in terms of free agency and the trade market, not in the context of him not being able to hit shots like he has in the past.  Let's end this with a few bullet points:

Finally, it was brought up in the comments last night that I should once and for all wrap up the Shaddy/Foye Death Match.  It hadn't occurred to me that I hadn't done this yet.  However, after checking the archive, it appears that we really haven't declared a winner.  That being written, let's do it: Foye wins.  He wins big.  He wins more than big.

I'd like to hear about what y'all think about Foye going forward.  Can he keep it up?  Is this who he really is?  Can you think of another player who has transformed himself to the effect of what Foye has done during a single season?  What say you?