In need of a zombie doctor

Share All sharing options for: In need of a zombie doctor 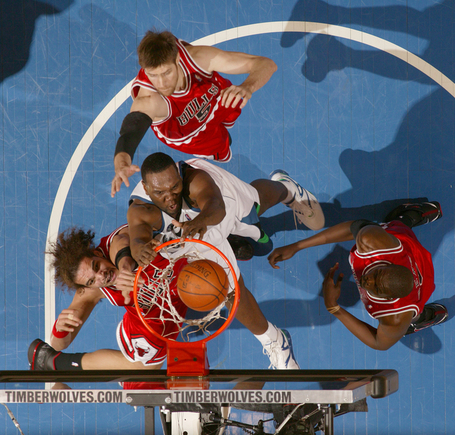 OK, you can take the following statement with as many grains of salt as needed coming from a guy whose highest level of organized ball was the Pacific Rim military base league, but answer me this: How in the hell is Vinny Del Negro an NBA coach?

Watching the Bulls last night gave me a brown-sheet acid flashback to the Witt-ball days of yore; an overbaring, untested, unqualified, disciplinarian of a coach telling his collection of athletic, fun-and-gunners to run plays that don't work in sets that don't fit; all the while probably cashing all sorts of leadership checks that have nothing in the bank to back them up.  I know this may sound silly, but you can just see it in the Bulls players' faces.  They've had it with this clown and they're not going to change.  You can see the talent on the roster.  They seemingly would excel in an up-tempo game based on transitional offense, an athletic front court in Joakim Noah and Tyrus Thomas, and a back court of Ben Gordon and Derrick Rose that has the makings of an outside crew that can really, really put the ball in the bucket.  Granted, they have some pretty heavy roster/personnel issues (seriously, who in the hell signed Kirk Hinrich, Andres Nocioni, and Luol Deng?) but they have a nice core that looks like it is being misused in Wittian proportions.  Anywho...

As bad as things got during the 1st quarter last night (and they were bad) I never had the feeling that the Wolves were going to lose the game.  Once I saw that Del Negro was going to play the b-ball equivalent of prevent defense while running some pretty weird rotations, I knew the Wolves would get back in the game.  The Bulls shot 57% in the 1st to the Wolves' 26%; add this to a questionable and beaten-down roster and a Wittman-esque coach, and the Wolves damn well should have made their way back into a game against what can best be described as a former version of themselves.

With 19 points, 15 rebounds and a +16 in just over 33 minutes of play, you might think that this would be a good night to sing the praises of Kevin Love.  After all, the  Big Piranha (nickname pending) brought it all last night; mid-range shooting, high-level muckiness, upper-upper-upper-level offensive rebounding, team-leading help defense, shot-altering, and the prettiest outlet passing in the game.  With a season-high 39 points and 9 rebounds, you might think that the game ball should go to Al Jefferson.  The big fella got what he wanted when he wanted it and the Bulls had no answer for any part of his offensive game.  Don't get me wrong, the Wolves' future front court duo (it should be "current" front court duo as Craig Smith has no business starting in front of Love) played wonderfully last night.  However, the game ball goes to the little guy who has been doing the heavy lifting since Kevin Ollie went down with a dislocated elbow and Randy Foye was moved off the ball: Mr. Sebastian Telfair.

Tonight vs. the Bucks (the 2nd night of a B2B) watch how much Bassy has the ball in his hands.  Watch how the Wolves have moved Foye so far off the ball that Mike Miller is now taking turns bringing the ball up the court when Bassy gets a few precious minutes on the bench.  Bassy is pulling down over 35 mpg in January.  He has the ball in his hands on damn near every possession down the court.  He single handedly picks up the tempo and spreads things around when the offense gets to be a little too Al-centric.  He also has taken to either making his shots when they matter or interjecting himself into the offense when such a step is needed.  Against the Bulls, and during the awful 1st quarter, Bassy stuck his nose right in the middle of the stagnant mess that was the Wolves' offense and went 3-6 from the field.  Once the offense got back on track, he took 4 shots the rest of the way and instead focused on tempo and situational defense.  The guy is really learning how to run an offense and even to make up for his epically bad shooting.  He's limiting his shots, getting in the lane, picking his spots where he does shoot, and focusing on pace, passing, and defense.  I still think the Wolves need to address the back court in this year's draft but this in no way, shape, or form, should stop them from giving Bassy 25+ mpg with whomever they are lucky (or unlucky) enough to land.

The other game ball goes to Rodney Carney.  As has been mentioned numerous times in recent weeks, the Carney-vore (h/t to Auswolf) is coming off the bench and playing up to and past the level of play we fans expected from guys who were supposed to be part of the core.  However, despite what at first seemed like the most obvious comparison, Carney's replacement value is not vis-a-vis a certain former Gator.  Nope.  Carney is actually pulling double-duty.  He has completely taken over the role once available to Mr. Rashad McCants; the off-the-bench spark plug who runs the floor, shoots corner 3s and plays defense.  He has also taken over the role of Mike Miller, a guy who was supposed to be the sharp-shooter but who instead has fashioned himself as some sort of decent passing/rebounding wing who can't defend.  Let's add this to the pro-trade Miller column: even if Miller were performing at his career averages, how much more on-the-court value could he provide above and beyond the Carney-vore?  How much is this value worth when placed into the context of expiring contracts and wins produced per dollar?  This squad has shown massive improvement over the past month.  It has done so largely without Miller being Miller.  It has also done so while being absolutely hamstrung at the SF spot.  Ryan Gomes is a bench player is a bench player is a bench player.   This team has the opportunity to be relatively decent-sized players in the 09 free agent market.  If they can turn Mike Miller's contract into a run on Marvin Williams, it will further compound the ever-increasing advantages taken from the Mayo/Love trade.  Hell, if the team really wants Miller for the long-haul, sign him back in 2010.

Finally, I would be remiss if I did not mention that the Carney-vore had an eFG of 1.083% last night.  You know you're having a good day at the office when you're batting over 1.000.

That's it.  Until later.

UPDATE: I finally got around to installing the Yahoo Four Factor plug in.  The ESPN one stopped working when they went to Beta.  Here you go:

Check out the excellent OE numbers.  Here's how they did against NOLA:

There are some pretty crooked DE numbers in there but I'll go back to what I wrote before the beginning of the season as the #1 goal for the team:

a- A neutral OE/DE rating.  Last year the Wolves featured the 27th ranked offense and defense.  Overall, they had a -7.4 point gap per 100 possessions.  With the addition of Love, Miller, and a healthy Foye, they should be able to make up 5-6 points on the offensive end of the equation.  What remains to be seen is if they can make up the remainder on the defensive end.

In other words, they needed to get as close to 108-109 on both ends of the court as possible.  Right now they have the league's 20th most efficient offense at 106.3 points/100 possessions and the league's 5th most inefficient defense at 109.7 points/100 possessions.  As you can see by how they have been performing since the start of the year, the OE is on a rapid incline while the DE is...well, it's jagged.  Here's hoping they can level the ship at around 108-110 on the defensive end while continuing to go nuts on offense.  The way they are going now, it looks like they could hit a 109 OE by mid-February.  If they can do this, and if they can continue to maintain their amazing rebound rates, then they can survive nights when opponents go for 50%+ from the field.