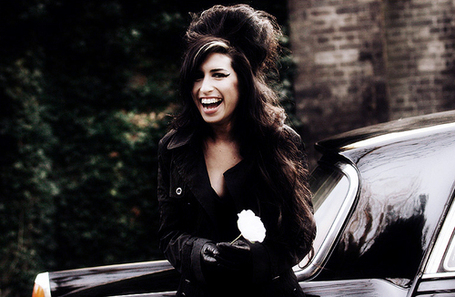 "They're winning against losers."  "Everyone they play is hurt." "They really won't be tested until Boston and LA." "Yeah they're winning but they're doing so against inferior competition." "She's a troubled artist."

Sorry, the picture of little Ms. Heroin Pincushion got me distracted on the last one.

Yours truly was not able to watch the game last night.  You see, I paid for League Pass Broadband but the game was blacked out even though I live out of Channel 45's range (and a mile from Papa Glen's house), have no cable (it's the devil), and am 80+ miles from the arena.  Since the game was Wolves/Bucks, not even overseas pirates were going to put the game on line.  I was all set to go watch the tilt at the gym when I remembered that we have some friends coming over this weekend and I promised them I'd cook them some Onglet Gascon with homemade French Fries and that I had no demi glace in the freezer.  Thankfully, I had a few veal bones in the deep freeze and I was able to boil up a nice veal stock and this morning I'm bringing the whole thing down in a pot of shallots and red wine reduction.  Unfortunately, I'm going to have to skimp on the presentation because I can't seem to find a good veal bone with enough marrow to serve as an appetizer that will, with the fries, soak up all the juices when I serve the steak.

My god, I need to shower after writing that.  Although, after reading it a second time, I think I have a future as a NY Times conservative columnist.

Bottom line: Wolves are putting food on their fans' plates and I was unable to watch the game.  It can't all be gourmet and I may have to catch a few contests on the radio.  What did you guys think of the tilt?  Did anything stick out?  You can leave your observations in the comments or in a FanPost.  Your help would be much appreciated.

You can read a Bucks' fan's take over at Brew Hoop.  Weirdly enough he is rocking a 1st/3rd world thing this morning as well:

The Wolves feasted on a thin Milwaukee club plagued by a talent famine at the Bradley Center. Short on star players, short on scoring options, even short on layups, the Bucks fell short to Minnesota, 90-83.

I think saying a professional sports team is starving with a talent famine qualifies as a First World Problem.