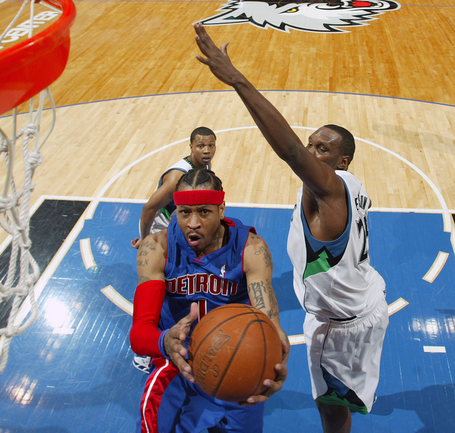 First of all, Kevin Love was jobbed.  As if the disappointment of once again not having a worthwhile player in the All Star festivities wasn't enough (and no, Cupcake and Shaddy don't count), I Googled "NBA rookie game" to find this:

NBA rookie-sophomore game to feature a pair of Clippers

A pair of Clippers?  Really?  Why don't you just put some salt on that hot poker you're aiming to put directly into my pupil?  The Big Piranha was beat out by another pair of teammates, O.J. Mayo and Marc Gasol.

Two guys from both the Clippers and Griz get to play in the damn game and Love gets to sit at home?  Let's take a quick peak at rookie and sophomore WARP:

Yes, that would be the BIg Piranha at the top of the list.  You can go to Hollinger's rookie stats, 82Games, Knickerblogger, whatever; Love got shafted.  Love is the league's leading offensive rebounder and he has played light's out since Christmas.  His team has a combined 11 wins more than the Clips and Griz.  Presumably, when Al Jefferson is shafted so that The Big Doesn't Play Back to Backs can strap it up in front of the home crowd we Wolves fans will repeatedly be reminded that winning matters and other assorted nonsensical bullshit.  I know that the selection of the rookie game roster doesn't exactly receive a ton of scrutiny, but Love not making the cut is every bit as BS as what will likely happen to Al later on today...if not more.  The guy probably does one thing (rebounding) better than anyone else in the league and he can't make the rookie/sophomore game roster while 2 members from the Clips and Griz (to say nothing about Michael Beasley and two Blazers) get to go. Horse. Crap.

I'll be pretty short with last night's contest: Sebastian Telfair was hurt (only being able to play 20 minutes) and the lead guard combo of Mike Miller and Randy Foye led to this:

....and a game filled with half-assed entry passes, questionable sets, and a host of other bright, shining indicators that the Wolves still need to spend their 1st pick in the upcoming draft on a guy who can split the point duties with Bassy.  In other words, during the time in which the Wolves had to rely on Miller and Foye, the free-wheeling McHale ball suddenly went out the window and the team reverted to a tempo more reminiscent of Witt-ball than anything else we've seen during the last month or so.

On the bright side of things, at least we Wolves fans don't have to root for a team like Detroit.  Joe Dumars is building a resume that I believe will one day rival the front office workings of the Iron Ranger, their team is aging in front of our eyes, and they play in the LeBron/Howard wing of the NBA.  I get that they probably won't resign A.I. and that they will try and use his salary to rebuild, but I just don't see them attracting any more free agents than Minny and they will continue to draft in no man's land.  Perhaps they can turn it around with a solid trade but...well, we'll just have to wait and see about that one.

Speaking of trades, let's start taking guesses on when Mike Miller gets moved out of town.  Not only does moving his salary make sense in terms of 09 free agency, but it makes sense in terms of how this team is developing and moving forward.  For the Miller defenders out there, what does he bring to this team that will be carried forward beyond 2010?

Finally, the biggest disappointment about last night's game was that with the Lakers and Celts on the horizon, the tilt against Detroit should have been played with must-win urgency and it was not.  A lot of people are talking about the games against LA and Boston being some sort of barometer for the squad's play over the last month.  This is nonsense.  Boston and LA are 2 of the 3 best teams in the league and they are capable of hammering teams that far, far, far out punch OBZs.  The barometer for the Wovles was the game against Detroit and the tilts against Indy and Atlanta.  How would the team respond knowing that 2 tough games are coming up and how would they react after getting kicked in the teeth by the cream of the crop?   Last night's game was a disappointment because they were clearly a better team and they lost because of a self-inflicted wound.  They played with terrible pace, they made silly passes, they didn't set up screens, they settled for bad shots with little ball movement, and so on and so forth.  16 trips to the line and 8 OReb are not going to cut it for a squad that plays like this.  Still, it took Rasheed's amazing 4th quarter for an old, broken-ass Pistons squad to win.  Unfortunately, this is nothing to hang a hat on.  This is the type of performance we saw right before Christmas; most notably during the Spurs game where the opposing announcers remarked that the Wolves "must be satisfied with moral victories."  They needed that game last night and they didn't play like it.  Very disappointing.