Share All sharing options for: Up, up, and away 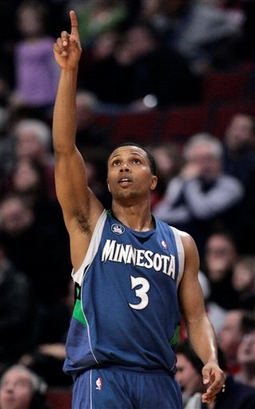 I have a long day of tile grouting ahead of me so this is going to be a short and sweet game wrap with nothing but bullet points.

Wrapping this up, I thought there was an interesting little sequence near the end of the 2nd quarter when Al Jefferson took the ball in the high post, surveyed the floor, put his head down, and jacked up a mid-range jumper while Randy Foye and Mike Miller were open from beyond the arc.  It was ugly.  It was stagnant.  It was reason for a timeout.  On the next possession down the court, Al got the ball in the same spot, put his head down, and...McHale called a timeout.  According to the Bulls announcers, Al was pretty pissed about the timeout because he thought he had an open shot.  He did; just like the last possession where everyone was standing the hell around.  After the TO the Wolves moved the ball around, guards were in motion, and Love delivered a pass to Jefferson in the lane for a layup.  And so goes the Jefferson Paradox.  He has the potential (often realized) to be an offense killer while, at the same time, being the team's most brutal offensive threat.  It was nice to see McHale call the obvious TO and then run a play for his star player that also involved the rest of the team.  When the rest of the team benefits, Al will prosper.  Perhaps not to the tune of 25/15, but 18/14 is quite nice when you run an offense that allows for 18/12 from Love, 15/6 (asst) from Bassy, and 21 from Foye.  If Mike Miller ever gets it figured out, this team could be on to something.