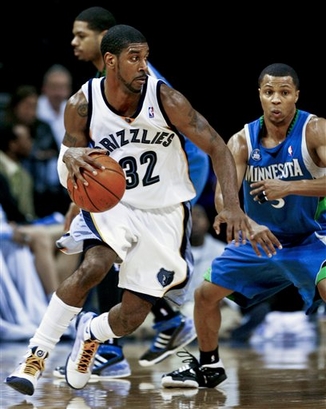 Before I get around to the Wolves' 3rd win in a row, let me take you back to something I wrote in the season preview about the goals for this team:

a- A neutral OE/DE rating.  Last year the Wolves featured the 27th ranked offense and defense.  Overall, they had a -7.4 point gap per 100 possessions.  With the addition of Love, Miller, and a healthy Foye, they should be able to make up 5-6 points on the offensive end of the equation.  What remains to be seen is if they can make up the remainder on the defensive end.

Modest defensive improvement was all that this team had to show in order to compliment what should have been, up to this point, a much better offense.  We're talking upper-lower-middle-class numbers of as close to 108 as possible.  Currently, the Wolves have a DE of 110.2, good for 26th in the league.  This is actually a slight improvement over last year's 111+ rating.  Of course, pace is always a concern but we'll have to see how McHale ball plays out to say more about that.

Since Christmas (apparently the starting point of good Wolves ball), Our Beloved Zombies have put up OE scores of 121.2 (Kicks W), 97.9 (Magic L), 110.2 (Memphis W), 116.3 (Disaster in Dallas/Casey's Revenge), 113.9 (GSW W), 104.1 (Bulls W; thank the 1st quarter for the low score), 108 (Memphis W).  Over that period OBZs are scoring 104.7 ppg while giving up 102.4.  This team has to win with offense.  Improved situational (see Foye, Randy) and team (see Love, Kevin) defense is needed, but the way that this team was going to close the gap in performance was with guns a'blazing, not with a Bobby Knight clone yelling about defensive discipline while his team slogs its way through game after game.  Right now the Wolves have an OE of 103.8, good for 23rd in the league.  As you can see from the recent streak (albeit against sub-par competition), this number has room for improvement.

Right now the Wolves have a -5.6 ppg differential.  This puts them ahead of GSW, LAC, Washington, OKC, and the Kings; and right behind Memphis, Chicago, New York, Toronto, and Indiana.  You know, teams the Wolves are on par with.  OE-wise, the Wolves are ahead of the Sixers, Griz, Kings, Bobcats, Thunder, and Clips; and they are right behind the Wiz, Bucks, Bulls, Heat, Knicks, and Pacers.  Again, these teams are the Wolves' direct competition.  DE-wise, they are ahead of the Nets, Wiz, Kings, and Warriors; and are directly behind OKC, Portland (?), Toronto, and Phoenix (?).  In other words, this team isn't as bad as its record suggests and they are right in the middle of a fairly sizable chunk of bottom dwellers.  How can they make their way out of this pack?  With improved offense and a solid off-season.

I cannot stress enough just how important this off-season is.  From the draft to free agency, this is the year where they have to make good on the Garnett trade. This team can start to move away from the bottom-feeding pack with a good off-season.  We'll have more on what they can do in the off-season in a later post.  Hint: it starts with hiring an honest-to-Pete real GM.

Getting around to last night's tilt, the first thing one noticed while watching the game was that no one was in the damn arena.  This is of interest because the last time the Wolves played Memphis, Star Tribune basketball hack columnist Pat Reusse wrote an entire column about the return of the "Wolf that got away" geared around Mayo's ability to pull fans back to the FedEx Forum:

Those few Wolves apologists still to be found locally contend trading Mayo was wise, since it was clear he didn't want to play in Minnesota. The supporting evidence offered was that Mayo declined to work out for the team.

Mayo was asked if that was a proper read on his situation.

"No, not at all," he said. "It was what my agent thought was best for me. Mr. [Leon] Rose has been around this a long time. I just went with what he felt."

There was controversy surrounding Mayo and reported payoffs from the sports agency run by former Gopher Bill Duffy while he was at USC. There were also rumors of Mayo being surrounded by hangers-on -- a situation that makes some teams nervous.

There have been no problems with Mayo in Memphis. The basketball fans there are being drawn back to the Grizzlies by his nightly creativity as a scorer.

No problems? According to the box score, slightly over 10,000 fans showed up to watch the 11-24 Griz.  It's impossible to tell by watching on TV, but my guess is that this count is about 4,000 over the actual number of buts in the seats.  It doesn't really matter.  The Griz have the lowest attendance in the league.  In fact, they are drawing slightly fewer fans than last year's team.  Griz fans are not being drawn back by Mayo's "nightly creativity as a scorer".  They are staying away from a team with a terrible front court that is losing on an increasing clip.  Meanwhile, up in Minny, their attendance is also down.  They, however, have a surprising amount of assets (largely brought about by the Love/Mayo trade) that will allow them to be players in free agency, the draft, and in the trade market.  Fans will come back for good ball, not creative scorers on bad teams.  The Love/Mayo trade put the Wolves in a solid position to become a good team.  Anywho...

Last night's tilt was the first game I can remember in a long, long time where the Wolves led wire-to-wire.  Seriously.  When was the last game where they came out, hit the other team in the mouth, and then stayed out in front throughout the rest of the contest.  The Disaster in Dallas/Casey's Revenge almost counts but they couldn't quite close the deal.  I honestly can't think of the last time this happened.  Any suggestions?

Last night's game was also goofy as all hell.  Check out the Four Factors:

The Wolves were equaled on the offensive boards, they turned it over a bunch and they didn't get to the line as effectively as Memphis.  How did they win?  I can't believe I'm about to write this, but they won...with solid shooting.  When was the last time they won with solid shooting?  61% in the 1st, 32% in the 2nd, 45% in the 3rd, and 53% in the 4th.  If you take into account Bassy's 2-11 performance, the shooting is even more impressive.

The Wolves also racked up a season high in turnovers (19) while getting a season high in blocks (11). All 5 of their starters scored in double figures while their bench effectively held serve in key stretches of the game (the end of the 3rd and start of the 4th being the most important ones).

Speaking of bench players, with Kevin Ollie out for a few weeks, and after Mike Miller went down with yet another sprained ankle scare, and even after Bassy was sent to the bench for a breather, Rashad McCants could not break into the lineup.  How far into the doghouse is Mr. McCants?  On the 1st night of a winnable B2B, Kevin McHale didn't give Shaddy a minute of burn even though his back court was stretched thin.  It would be very interesting to know what is going on behind the scenes with Shaddy.  It's absolutely baffling that he can't seem to wrap his head around his talent and situation.  How can he not see that this may not just be his last best chance with the Wolves, but his last best chance with the league.  He's awful.  I'll remind everyone once again of what I wrote about him back in mid-December:

He is having a historically awful season while dating a d-list celebrity and getting zero burn.  His most memorable on-court moment this year was when he jawed off at LeBron before getting laughed at and torched by the best player on the planet.  How delusional is this guy to not see what is happening to his career?  You. Are. Not. An. A-lister. You. Are. Not.  A. Star.  There is nothing wrong with this.  You can have a fantastic career as an off-the-bench energy guy who can play solid defense while bringing above-average 3 point shooting.  It's obvious to everyone but you.  As someone who has defended him in the past, his current situation is especially frustrating to watch.  If only there were a way to put Ollie's or Cardinal's brain in Shaddy's head.

Wrapping this thing up, the 2nd and 3rd biggest things that jumped out at me about last night's game (outside of the empty arena) were a) Kevin McHale's increasingly obvious inability to properly handle his lineup in high leverage situations, and b) this team is in desperate need of another point guard.

As far as McHale goes, how much slack should he be given?  After all, he is sort of a rookie coach.  He clearly has this team playing better ball and the players seem to be responding and...gasp...improving.  That being said, it can be painful to watch his in-game meltdowns with substitution patterns, timeouts, and the use of other assorted important coaching tools.  He often uses these things correctly (last night he made yet another solid TO call when the offense became stagnant), but he also fails in spectacular Disaster-in-Dallas/Casey's-Revenge fashion.  How much slack should he get?

Here's hoping for another win tonight against OKC.

BTW: Darius Miles was released after the game.  Portland's cap space is safe...for now.  Howver, Miles could likely be resigned after this weekend as his contract will not have to be guaranteed for the entire season.  It's weird how the NBA's CBA turns players into meaningless dollar signs.

UPDATE: Zgoda makes a good point about the Wolves' physical play.  They've had noticeably sharper elbows since Christmas.  They've also been on the floor a ton with hustle plays.  Last night Brian Cardinal made the hustle play of the year; keeping a possession alive with an all-out backwards dive to tip a loose ball to a teammate.  I will never understand how a basic dunk can get more highlight time than an awesome hustle play like this.