Kevin Love breaks the 4th metacarpal on his left hand

Share All sharing options for: Kevin Love breaks the 4th metacarpal on his left hand 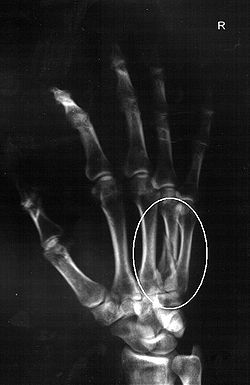 Here is what a broken 4th metacarpal looks like.  According to a few WebMD-style sites, it takes about 4-6 weeks to heal.

UPDATE: According to our doctor sources (including one physical therapist for a local sports team), this is a 4-8 week recovery depending on the type of use after the cast is removed.  Probably closer to 8 weeks for a high contact sport like basketball.

UPDATE iii: While we're at it, let's use this post as a quick wrap up of the game: