OK, credit is due where credit is due, and I can't think of any better way to start this post than to give the Line of the Year (So Far) to LoveTo for his catchy turn of a phrase for when Wayne Ellington gets hot from beyond the arc.  It's a long year and it will be a hard-fought contest, but LoveTo is in the early lead.

Getting around to the game, the Wolves finally put together 48 minutes of exciting ball.  I can live with losing.  I can live with being outmanned.  What I can't live with is a sports entertainment franchise being boring.  For far too long the Wolves have been both bad and unentertaining.  Last night the Wolves scrapped, ran, moved the ball around, played scrappy defense, and out-efforted the Pistons by a wide, wide, wide margin, especially in the second half.

The Wolves had six players in double figures, two more with seven ponits apiece, 22 assists (well above their 16.3 average in the preseason), 46 FTAs, and only 9 turnovers.  With their two best players out of action, the Wolves turned in an all-around team effort built on grit and hustle.  The result isn't something you'd really want to bet on, but the effort was more than enough to make you want to watch...and that's about the best we can ask for with this young team.

In other words, keep your eyes on the side of the court with two players.  Also, get ready to fully understand why the Wolves will need a versatile swing man.

Well, that about does it for the wrap up.   What say you?

BTW: How cool was it to see this: 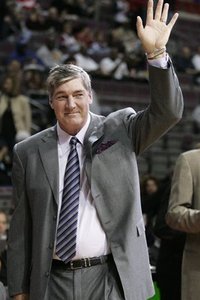