Part 2 of the Overseas Experience

Share All sharing options for: Part 2 of the Overseas Experience 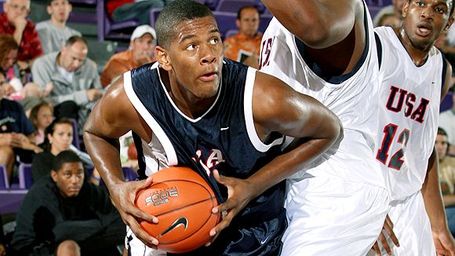 Right before the Bucks game we had a post with a passing reference to Brandon Jennings and his decision to head to Europe and make money for himself rather than CBS and the NCAA.  Jennings had some ups and downs but on the whole the EL experience seems to have been a good one for him and his NBA prospects.  It's looking a bit different for Jeremy Tyler:

His coach calls him lazy and out of shape. The team captain says he is soft. His teammates say he needs to learn to shut up and show up on time. He has no friends on the team. In extensive interviews with Tyler, his teammates, coaches, his father and advisers, the consensus is that he is so naïve and immature that he has no idea how naïve and immature he is. So enamored with his vast potential, Tyler has not developed the work ethic necessary to tap it.

"The question is whether he’ll take responsibility of his career," Haifa Coach Avi Ashkenazi said. "If he thinks he’s going to be in the N.B.A. because his name is Jeremy Tyler and he was a very good high school player, he will not be."

There's a lot more in the NY Times article.  There are a few ways this could work out for Mr. Tyler.  He could have an epiphany (in the Holy Land no less) and realize his potential through hard work in a man's league or he could admit defeat and go back to beating up on overmanned high schoolers (he's skipping his senior year in HS) and college freshman.

The take away point, for me, is that the options for elite high school talents who want to get paid for their basketball skills right out of HS are still remarkably limited.  The NBA is one of the rare professional leagues where a few high school grads can step right in and play.  Its players deserve a good development league or feeder system that pays.

Should the D-League be able to draft high schoolers?  Should more kids give overseas professional leagues a shot?  What say you?